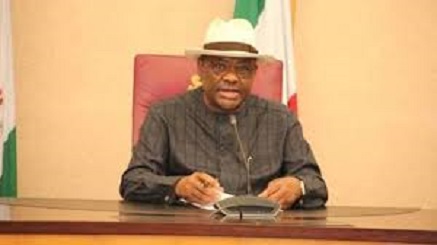 The Governor also ordered the demolition of an illegal market along the Elele Alimini and Ahoada axis of the East-West Road in the state.

Wike directed everybody engaged in illegal activities in the area to quit because all structures in the marked places would be demolished from June 9, 2021.

The Governor gave the warning on Tuesday during the commissioning of construction work at the Ahoada Campus of Rivers State University, and the dualisation of Ahoada -Omoku Road in Ahoada Town.

He said: “Let me tell you, the state government has not authorised any market from that Ahoada Junction on East-West Road, keeping to your right and going back to Port Harcourt. Everything there are illegal structure.

“It doesn’t matter who owns them. Whether you come from the South, East, West or North, if you have any of those illegal market structures, from that junction down to Elele Alimini, I’ll bring all of them down.

READ ALSO: No cabal can choose my successor, says Wike

“I did not authorise any market and nobody can build a market on the road. Not even a local government can do that. So all of you who have been going to them to collect tolls from them, be prepared. No market must be on the East-West Road.”

The Governor described as shameful the reports of some traditional rulers selling employment slots meant for their subjects to satisfy their selfish interests.

He said: “I cannot bring development to this place and criminality will be on the increase. We want companies to come to Ahoada but how will you get employment without companies?

“Every day you cry of unemployment when the few companies that have come, you’ll not allow them to stay. You and your traditional rulers will chase them away with your demands.