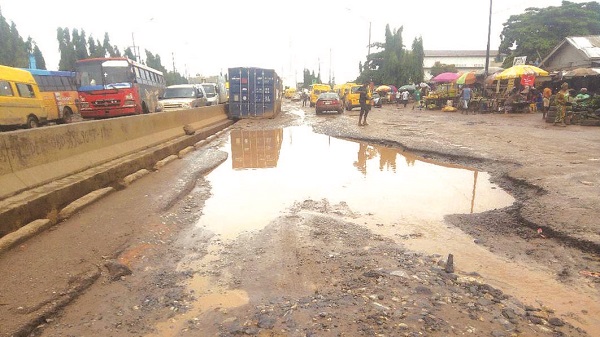 I’m no stranger to driving from the Abule Egba end of Lagos to Otta in Ogun State. Before the COVID-19 lockdown, I usually drive at least once a week to church in Winners Chapel, Cannanland along the Otta-Idiroko road through the Lagos/Abeokuta Expressway.

Over the years, the Lagos-Abeokuta Expressway has gone through various stages of repair and disrepair. Some sections of the road that usually caused major traffic holdups have been repaired, including provision of pedestrian crossing and bridges at the Abule Egba and Otta junctions.

However, before the ban on religious gathering, some parts of the major road connecting Lagos and Ogun state have gradually deteriorated with ditches, not pot holes at some parts, thus making it almost impossible to drive through but for motorists who do not have a choice.

The Ambode’s administration did very well by providing some alternative connecting roads through the Ipaja/Command end to Otta, which was the saving grace before the lockdown for worshippers in Cannanland and other residents who have to drive to and from the area.

Instead of driving through the gullies on the expressway and spending hours in traffic,  the feeder roads provided by the Lagos Government have become the preferred route for those whose destination are not along the bad portions.

Even with the absence of the weekly Winners Church members’ large congregation, the roads have become worse. The Otta-Idiroko road, which the church at various times patched to make them motorable, is in such a state of disrepair that driving along it is a horrible experience.

I had to stop driving my car on the road during recent visits after my first attempt damaged my radiator because I am not used to how to manoeuvre through the ditches.

The Lagos/Otta/Idiroko/Abeokuta roads are just examples of how bad the roads in the country are.

Across the country, many major roads have become un-motorable but everyday Nigerians have no choice but to drive through them at great risk to their personal health and vehicles.

Despite promises to repair the roads, what we are witnessing is a state of abandonment that leaves one wondering if the government really knows how badly the situation is. It’s a shame that many roads across the country have become so bad without any indication that they will be repaired soon.

Typically, the roads may be left until they become impassable before an attempt would be made for another round of temporary repair.

Why should the roads to Otta for example, which is supposed to be in industrial town, with the largest church chapel and top rate university have such  bad roads to link it?

I remember a Kenyan telling me during one of the end of year programme of the church that if Cannanland was in her country, the government would ensure the roads leading to the place are well taken care of because of the tourist potentials judging by the large attendance from branches of the church outside the country yearly.

I try to imagine the reactions of foreign visitors to the Covenant University reputed to be the best private university in the country when they are driven through the bad roads.

I know people who have had to abandon their houses in Otta because of the bad roads, when with good road networks, Otta and other neighbouring towns should have been the best alternatives to the chocking Lagos city landmass.

The government has no choice but to ensure the repairs of the roads and building of standard roads that can cater for our teeming population wherever they live in the country.

With bad roads, there are many obvious and not too obvious losses which we cannot afford to incur personally and corporately.