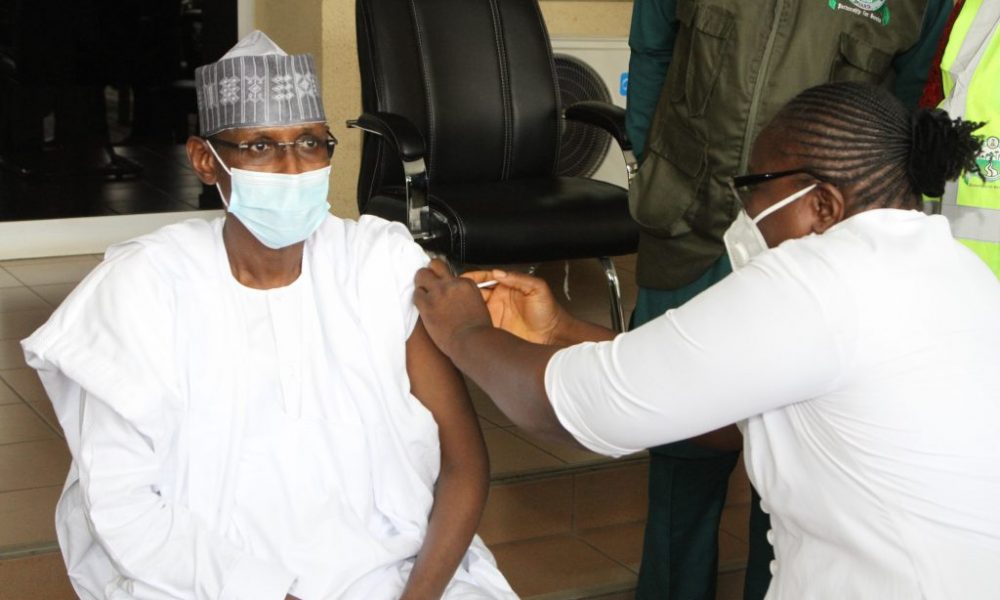 A second dose of the AstraZeneca COVID-19 vaccine has been administered to Muhammad Musa Bello, Minister of the Federal Capital Territory, FCT, Naija News reports.

Conversing with newsmen on Thursday in FCT, Bello who took his first jab of the COVID-19 remedy on March 11, at his office at Area 11, Abuja, revealed that 98% of the total doses allocated the FCT by the Federal Government have been used.

The Minister encouraged residents of the Federal Capital Territory to grab whatever opportunity that comes their way from the federal government. Bello charged the residents to ensure they all get vaccinated against the dreaded virus which held the entire world down in 2020.

He said, “Whatever, support the Federal Government is giving to us in the FCT, let’s grab it and use it effectively because, unless we get a substantial percentage of our population fully vaccinated, then we will not reach what the public health officials call herd immunity whereby we can say that the incidence of this particular disease has been conquered.”

Bello reiterated that it is only through vaccination that they can develop immunity against the virus stressing that those who are yet to participate in the vaccination exercise should endeavour to do so.

The Minister further noted that while the number of positive cases in the FCT has been on a steady decline, despite the a large number of residents being tested, residents must not be complacent but should continue to take measures to protect themselves against the virus.

The Minister also assured that the FCT Administration will continue to work hard to ensure that every resident is protected against COVID-19, with the efforts of the FCT Health and Human Services Secretariat.

The minister, thereafter, called on officials of the HHSS to continue to work to maintain all the facilities that have been established and installed for the pandemic, to ensure that the FCT is fully prepared for any unforeseen event.

Others who received their second jab alongside the Minister were the Permanent Secretary, FCTA, Mr Olusade Adesola, the Chief of Staff to the Minister, Malam Bashir Mai-Bornu, and other officials, Naija News understands.