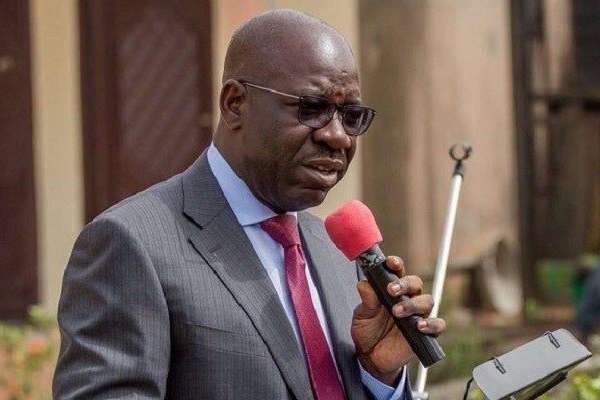 Fela, the “Abami Eda” himself, may not have coined the phrase.  But he sure popularized it: Basket mouth — mouth that yaks and yaks and doesn’t know when or how to stop.

That would appear the current state of Edo Governor, Godwin Obaseki, whose flippant (un)gubernatorial activism just tossed fellow governors, and their states and people, into avoidable storm.

Brimming with financial messianism, Obaseki, bolt-from-the-blues, had alleged the Central Bank of Nigeria, in concert with the federal fiscal authorities, printed via notorious “ways and means” N60 billion to augment shared March federal allocations, in the face of dwindling resources.

Even after Zainab Ahmed, Finance minister, said Obaseki’s claim was “very sad because it is not a fact”, the governor still went on the offensive, with one of his factotums telling Madam Finance Minister not to play the ostrich, but rather come clean that the Federal Government was in financial woes and should seek help.

That felt gubernatorial arrogance must have piqued Godwin Emefiele, CBN governor, who neither confirmed nor denied Obaseki’s claim, but clearly must have considered the governor’s stunt the height of ingratitude, enjoying, as it were with other governors, federal budget support funding.

Emifiele’s pique echoes the Yoruba brat that proclaimed his parents so daft to have fed him so well!  So — apparently — he rolled out the big guns: states must start paying back federal support loans, worth $2.1 billion, he declared in a huff!

Unlike the Yoruba brat-child, however, the loans were no lavish munificence.  But the ration was life-sustaining enough for most of them to panic at the peril of a sudden repayment, thus causing them to launch a counter-media campaign to stop the CBN governor.  The huge cost of a loose tongue — Basket mouth!

Some PDP governors have accused Emefiele of vengefulness.  That may well be.  But it is rather rich carpeting the CBN governor without first rebuking Obaseki for flippancy and recklessness.

The APC governors, on the other hand, have duly knocked Obaseki.  But they should have cautioned Emefiele too, not to do an emotive response to the Obaseki rascality.  States and their long-suffering people shouldn’t take a bashing just because of a governor that lacks a sense of tact and balance.

But maybe the Progressive Governors didn’t — and couldn’t — say so, being sensitive  not to further worsen the already grave situation.

Still, fair is fair.  If Emefiele is indeed angry, he has a good cause to.  But emotive, knee-jerk reaction is no substitute to clinical and reasoned policy thinking, no matter the provocation.  So, rail-roading the states to pay back on the double is a no-no.

The CBN and the federal fiscal authorities did state budget support because of Nigeria’s eerie federalism, which seems more at home with a unitary set-up.  If the states are constitutionally empowered to drive own resources, it’s doubtful if any budget support would be necessary.

If despite all that, a flippant Obaseki is still reckless with his state resources, there would be no federal scapegoat to would burn at the populist stakes.  So, the ultimate solution would be to amend the law for the states to have better and greater control of their resources, in the best tradition of federalism.

So, while the CBN czar should chill, Obaseki must be advised to think before talking next time.  The hefty cost of a gubernatorial loose mouth could be devastating as we all can see.  Playing a Governor Basket mouth is seldom any virtue.