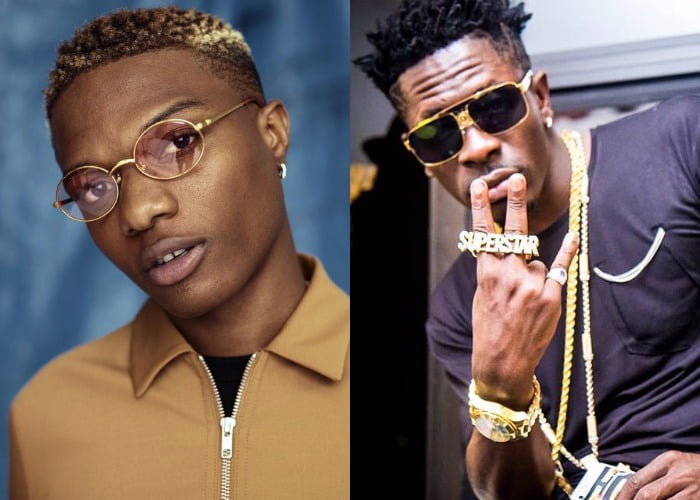 The streets of Nigerian twitter is a dangerous and scary place that wouldn’t want to ever face. Nigerians spend the entire day either trolling the president or anyone that tickles their fancy.  It’s all fun and games until you – who is not a Nigerian, who don’t live where there is no electricity, where politicians spend millions on a building rather than healthcare decides to get involved.

What’s even worse is when you decide to attack a national treasure like Wizkid. You don’t only get lashing from Nigeria as a whole country but from the ever raging and iconic Wizkid FC. There’s an ongoing war between Ghana and Nigeria and it’s all because of Wizkid.

The conversation started when a fan page stated that Shatta Wale is a bigger artiste than Wizkid. This is due to the fact that Beyonce used Shatta Wale’s image to promote her “The Gift album” and even released a video with him. As expected, Wizkid FC came with a full force to slam the Ghanaians, and oh well, some people might have to review their use of Twitter by the time this is over.

See some of the reactions below:

The only Top three musicians Ghanians can use to brag are Sarkodie, Shatta Wale, And Shatta Bundle
While Nigerians are using Rema Fireboy, and Joeboy
Our young stars for that matter#GhanaVsNigeria pic.twitter.com/HxE1P8MnYC

If you know you are feeling this spiritually let me hear you say Yeah, Yeah. Only this WizKid slag is bigger than Shatta Wale career https://t.co/ziTwozcUNP

Ghana is still on Public Holiday, because of Beyonce did a song with Shatta wale ?,

The Greatest achievement since the History of Ghana.

See what Ghanian Dancehall king Shatta Wale has to say about his beloveth country, Ghana!#GhanaVsNigeria pic.twitter.com/lAQThe372i

The same wizkid that won best artist in your country when your country man is there
Your shatta wale , said he wouldn’t perform in a show in Ghana if they don’t cancel wizkid , and wizkid still performed there

Wizkid gave most of your artists their hits

Once upon a time CAF awards was hosted in a country called Ghana (Shat ta Wale’s home soil) Wizkid and Tiwa savage were headline artiste for the event. Shatta Wale didnt even get an invite to the occasion. Levels man! Levels!

You mean this Shatta wale that’s listening attentively to his Boss Wizkid??#GhanaVsNigeria pic.twitter.com/VL9UT8upQ4

Shatta Wale was allowed to get closer to Beyonce but sake of bad body and mouth odour they denied Wizkid ?#GhanaVsNigeria pic.twitter.com/yIytsRszvl

Shatta Wale was allowed to get closer to Beyonce but sake of bad body and mouth odour they denied Wizkid ?#GhanaVsNigeria pic.twitter.com/yIytsRszvl

While wizkid got signed by UBA for $1million in one day ?#GhanaVsNigeria pic.twitter.com/SEbKDirLFw