Home » News » UNILAG… A convocation toned down by COVID-19

UNILAG… A convocation toned down by COVID-19 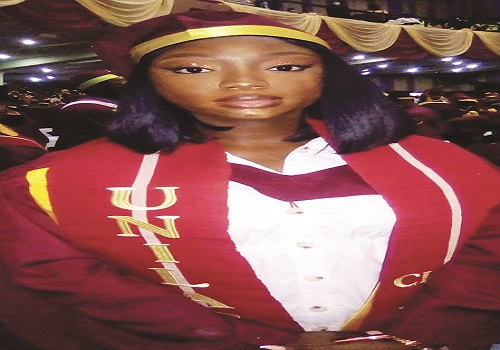 The COVID-19 pandemic toned down the usually flamboyant convocation of the University of Lagos (UNILAG) held from last Monday to Thursday. KOFOWOROLA BELO-OSAGIE and GBEMISOLA ADESOLA report that the graduation brought joy to many in the university, especially as it was rocked by crisis last year.

The convocation for the Class of 2019 at the University of Lagos (UNILAG) was the most subdued in recent years because of the COVID-19 pandemic.

The 15,753 graduating students had to wait one long year for the convocation – the 51st edition – cancelled at the eleventh hour March last year due to internal crisis between the university management and the Governing Council then chaired by Dr. Wale Babalakin, Chairman, Bi-Courtney Group of companies and an alumnus.

It was only the heavy traffic on the University Road and adjoining streets leading to the institution that gave a sign that the convocation was indeed taking place Monday through Thursday.  However, the carnival-like atmosphere that has become synonymous with the event was absent.  Previously, the festive air would have been felt from the main gate.  Both sides of the road leading to the venue (in the past, the Jelili Omotola Multipurpose Halls, and presently, the Ade Ajayi Main auditorium) would have been lined with rows and rows of canopies hired by graduands to host families and friends.  All kinds of food, drinks, cakes and other confectionaries would flow freely and music – both from itinerant traditional drummers and music sets – would be on offer.

However, this week, it was all quiet from the university gate.  Graduands and their guests took the free bus rides on BRT buses stationed at the bus stop close to the Faculty of Education (a few meters from the gate) to the Ade Ajayi Main Auditorium, the venue of the convocation.  The university limited the number of graduands that could physically participate in the convocation to allow for physical distancing in line with COVID-19 safety measures. Family members not allowed into the venue stayed under huge tents outside and watched the proceedings on a large screen on the side of the auditorium building.  After the event, the graduands gathered in clusters with their guests for photos – no canopies and food in sight.

Vice-Chancellor Prof. Oluwatoyin Ogundipe regretted that the convocation, which holds yearly, had to be cancelled last year.  He said the cancellation had adverse implications – including denying a former Vice Chancellor, Prof. Oyewusi Ibidapo-Obe, of his emeritus professorship award.  Ibidapo-Obe died on January 3 this year.

Ogundipe said: “The negative impact of the cancellation was far-reaching. The university’s image was battered, funds committed to the production of materials and logistics for the ceremonies were wasted. Parents and students who had travelled to Lagos from different places were devastated and heartbroken. Even traders and vendors on campus were not spared. The cancellation of the convocation ceremonies was just one of many other issues that pervaded the university,” he said.

“It was worthy of note that Professor Ibidapo-obe had been slated for the conferment of Emeritus professor and would have received this award while alive if not for the unfortunate cancellation of the 51st convocation ceremonies on March 12, 2020. It was a great pain losing Professor Ibidapo-Obe to the cold hands of death.”

Nevertheless, Ogundipe was thankful that the University weathered the storm and was on the recovery path under a new Governing Council chaired by Dr. Olanrewaju Tejuoso, an alumnus.

“The University that was hitherto polarised suddenly became unified under the leadership of Dr. Tejuoso. The serenity, atmosphere of cordiality and sense of direction he brought is what we require for academic excellence in the university. Dr. Tejuoso came in with a vision to make the university of Lagos truly world-class, thus he has started engaging various organizations, individuals and stakeholders to support the university’s drive and efforts,” he said.

For the graduands, despite the long wait, the convocation was still exciting. The best graduating student in the humanities, Victoria Opeyemi Popoola, completed her NYSC in February and is already working as an investment analyst in venture capitalism.  But she said it was heart-warming to be part of the convocation.

The 21-year old, who graduated with a Cumulative Grade Point Average (CGPA) of 4.90 in Economics, said: “I did not think I would really be excited but it is still pretty exciting.  There is a part of me that is telling me, ‘get over it already; it has been over a year’.  But I think that we all seem to live in the moment and enjoy it.  It is not going to last forever.”

Another first-class graduate, Jane Imeoha of the Creative and Theatre Arts Department, said her journey to making a first-class started right from her 100 level and she was happy to be graduating now despite the delay.

“At first when they cancelled it, I felt very bad.  But I don’t think that it’s two years too late; I believe that now could never have been a better time to hold the convocation so I am still as excited as I would have ever been I’m even more excited now,” she said.

While generally happy with their experience as students at UNILAG, the graduands think the institution can still improve.

For instance, Victoria said it could use better classrooms and hostel facilities.

“I can say the community is great, the school is great.  If there is anything I would really want them to improve upon, it is more in terms of the infrastructure – probably the classrooms, lecture rooms and the hostels especially because I stayed in the hostel for three years.  And although it was exciting, really cool, there were some things that could be improved upon,” she said.

Oguneye Love Emmanuel of Marine Sciences spoke of some challenges studying in the hostels.

“UNILAG is a very good school, no doubt the university of first choice, but I think they can do better in trying to create modules. But not just educational modules alone, with things that will make people prepared because really we have graduated since last two years, but I can tell you that what you learnt in school is not really what you learn outside. It is a whole different ball game entirely. So just my one year of working made me realize that we need skills,” he said.

Ogundipe said the university was already doing something about skills through its Entrepreneurship and Skills Development Centre.

“The centre aims to promote the entrepreneurial spirit and support students to set up a profitable business ventures with their chosen professions before graduation.  It provides students with skills such as innovative thinking, business creativity, business planning, proposal writing, risk-taking abilities and business management skills required to develop new ventures and start-ups,” he said.