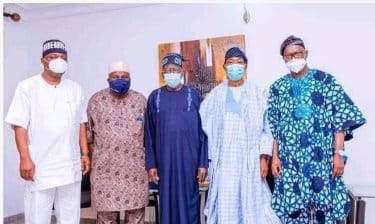 The presidential candidate of the All Progressives Congress (APC), Bola Tinubu on Thursday held a closed-door meeting with the Minister of Interior, Rauf Aregbesola in the Federal Capital Territory.

Tinubu’s meeting with Aregbesola is coming a few days before the commencement of the 2023 campaign season.

The APC presidential candidate is meeting with the former Governor of Osun State after months of an alleged rift between the APC political leader.

Recall that Aregbesola, in the build-up of the Osun State governorship election, had thrown a jab at Tinubu and condemned the state Governor, Gboyega Oyetola, who is a cousin of Tinubu for watering down his achievements in the state.

The alleged crisis between Tinubu and Aregbesola led to a faction in the party, while some members loyal to Aregbesola dumped APC for the Peoples Democratic Party (PDP).

The crisis eventually saw the incumbent Governor of Osun State, Oyetola defeated in the governorship election which was won by the PDP governorship candidate, Ademola Adeleke.

There were unproven speculations that Aregbesola worked against Oyetola in the just concluded election due to their differences.

However, with the latest meeting between Tinubu and Aregbesola, reports have emerged claiming that the APC National Leader might have resolved his differences with Aregbesola and want to reintegrate the former governor back into his political dynasty.