Home » News » Tension Inside House Of Reps Over PIB Bill

Tension Inside House Of Reps Over PIB Bill 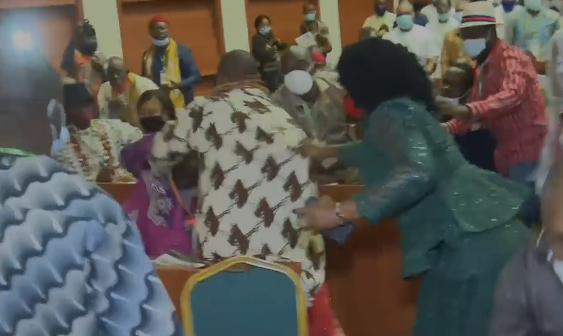 The House of Representatives has dissolved into an emergency executive session to iron out some contending issues on the Petroleum Industry Bill (PIB).

Some lawmakers had engaged in a shouting match just before commencement of plenary to consider the Electoral Act amendment bill and the conference report on the PIB bill.

Although what led to the shouting match was not immediately clear, fillers from the floor indicated some lawmakers were angry the conference report recommended 3 percent for the host communities.

While the House passed 5 percent, the Senate had recommended 3 percent for host communities.

Because of the row, the Speaker and other principal officers walked into the chamber without notice and the usual announcement.

Speaker Femi Gbajabiamila and the principal officers matched into the chamber midway into the shouting mtach.