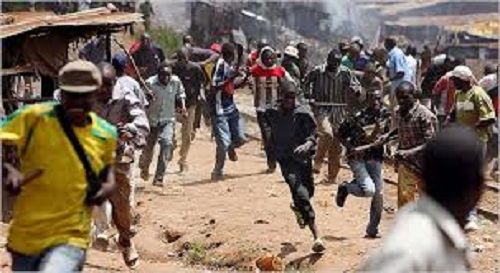 The attacked villages were Ajikamaka, Gidan Rail and Ankoma settlements near Rukubi where Olam farm is located, a border town between Nasarawa and Benue State belonging to the Tiv farmers.

The settlements belong to late Hon Micheal Koko, a Tiv man, who represented Doma South in Nasarawa Assembly between 1999 and 2007.

Majority of the victims were said to be deeply asleep when the marauding herdsmen surrounded the villages, set houses on fire and opened fire on fleeing villagers.

The Nation gathered most of the victims were children, women and young boys scampering to safety.

The invasion of the community occurred around 2:00am with the gunmen said to be chanting war songs.

Deputy Chairman of Doma local government, Hon Atukpa Osukunu, who confirmed the incident, said it was a reprisal.

He claimed herdsmen, who also settled within the area, found one of them dead in the bush and suspected the Tiv community for the death.

Nasarawa Police Public Relations Officer, ASP Ramham Nansel, said the attack was yet to be reported to the Police Command.

He lamented recurring attacks on Tiv people, particularly those living at the border areas between Benue and Nasarawa states despite efforts by Nasarawa Governor Abdullahi Sule and his Benue counterpart, Dr. Samuel Ortom to ensure lasting peace.

The Tiv leader lamented that the ugly development has led to the displacement of thousands of Tiv farmers in the area, regretting the incident occurred when the current farming season was about to commence.