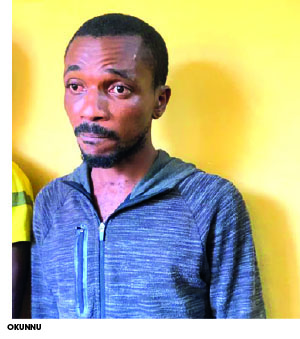 His name is Femi Okunnu and he is a son of a prominent Lagos family. In fact, his late dad was a Major-General with the Nigerian Army. But all this did not stop him from embracing a lifestyle of crime and criminality, engaging in criminal enterprises from Nigeria to Asia.

He employed a number of armed robbers to snatch cars at gunpoint and sell to him. He would then sell the cars to unsuspecting members of the public. He himself He had been making good money from the ‘business’ for years until recently when he met his waterloo.

The Lagos State Police Command nabbed the 39-year-old man for the theft and sale of several vehicles. He was alleged to have contracted the services of armed robbers in Lagos, Ogun and Ondo states to help him rob car owners and ensure a steady supply of stolen vehicles.

Jailed in Thailand and Indonesia over drug-related crimes, Femi was tracked down and arrested by operatives of the Lagos police Command’s Strike Force Team that had been on his trail after some suspected armed robbers nabbed by the police in Lagos alleged that Femi was their major receiver of stolen cars. He was lured to Iyana Ipaja by the operatives to pick up a Toyota Corolla already stolen by one of his suppliers.

According to the state police spokesman, Muyiwa Adejobi, a Chief Superintendent of Police (CSP), the suspect, upon his arrest, confessed to having successfully received several cars that he had been selling to unsuspecting members of the public. He is assisting the police to recover some of the stolen cars and arrest other fleeing car snatchers who are his suppliers.

But visibly shaken by his experience inside the police cell, Femi told Saturday Sun that he does not know why he decided to go into crime despite the fact that his family is very wealthy.

“My name is Femi Okunnu. I am the son of the late Major General Lateef Okunnu in Victoria Island, Lagos State. I am his first son.

“When I was in my 20s, my greatest desire was just to leave the country and travel to Europe. I told my father and the extended family and all they could provide for me was a letter of authorization and prayers. This was not my wish so I got involved with the bad boys and found myself in Indonesia as a hard drug courier. All was well and I was making money until I was arrested in 2002 while I was about to board a flight to Thailand and I was arrested with drugs.

“I was jailed in Indonesia for three years till my family got me released through the prisoner exchange programme. This was during President Obasanjo regime in 2005. My father died before I was released from jail.

“I was convinced again to continue the illicit drug trade and this time I was arrested in Thailand. My mother was so heartbroken. I believe that I was part of the reason she died when I was in Thailand Prison. After two years, I was also released after several interventions by my family. It was when I got back to Nigeria that I decided to enrol at the School of Oceanography in Victoria Island. I had to agree to go to school to convince the Okunnu family that I have changed. I was not steady because I needed to make money to be seen as successful. All my effort to stay clean failed despite all the promises by our family to establish me when I graduate.   “I drifted back to crime again. I started selling cars and I discovered that I could make much money receiving and selling stolen cars. The street is filled with bad boys, so it was easy to connect with car snatchers. They liked me because I paid them very well. I also made sure that that my buyers are genuine persons. That is why it will be difficult for security operatives to suspect me.

“Before I met Ola, I had two boys that were bringing cars for me. Unfortunately, they were arrested and jailed. They are Dapo and Tofumi and they are currently in Kirikiri Correctional Centre.

“I met Ola at a drinking joint in Ibafo when he was discussing with some guys about the money they made during traffic robbery. I told him that I would buy cars from him and at a good price. I told him to target Corolla as it is in high demand in Nigeria.

The first time he got a Toyota Corolla and he was stopped by the Taskforce at Oshodi. He called me and I quickly went there on a bike and met with the officers. I told them that the car is mine and showed them my identity card. Immediately they saw my surname, they were convinced and released the car to me.

“Unfortunately, when I went to collect the second car that he wanted to deliver, I walked into the trap of policemen. I thought it was the same story but it turned out to be policemen that had already arrested him. They allowed me to enter the car and tried to drive away, then they blocked me with their own car.”

According to Femi who said he never had an auto shop where he displays the cars he stole and sold, he was paying as much as N1million for a 2007 Toyota Corolla.

“I will pay the car snatchers N1million and sell it for N1.5million to ready buyers. My gain is normally N500, 000 per car. Since 2021, I have sold three 2009 Toyota Corolla, one Toyota Rav 4 and one Camry Hybrid. I sold all for N1.5million except the Rav 4 that I sold for N2.5million. The buyers are not aware that the cars are stolen because they were well refurbished and displayed at a car stand. The prices are normal too.

“I also sell cars that I imported, mostly accident cars which I would repackage and resell. It is when I do not make much money that I resort to buying stolen cars.”

On why he chose to disgrace his family name, Femi said he did not understand why he kept going back to crime.

“My father was a Major General and he tried his best to give me good education. I just found myself in the wrong group and I kept sinking despite the effort by my extended family to save me from that path. I have failed the Okunnu family and I know that they are embarrassed. I beg them not to forget me, as I am still their son.

“I want to use this opportunity to beg my uncle, a Senior Advocate of Nigeria (SAN) to forgive me and help me out of this trouble. I promise to live a better life as a true son of the family. I am sorry,” he pleaded.