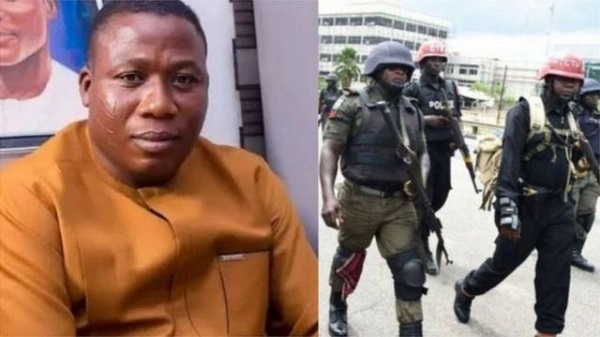 Some Southern and Northern groups yesterday disagreed on the arrest of a Yoruba nation agitator, Sunday Adeyemo (aka Sunday Igboho).

While the Southern groups, including Afenifere and Afenifere Renewal Group(ARG), accused the Federal Government of selective onslaught on agitators from the South,  the Northern groups said  Igboho’s arrest was in order,

The other groups are the Ohanaeze Ndigbo and  Abuja-based  Human Rights Writers Association of Nigeria(HURIWA).

Although Afenifere and ARG   said they were still studying the circumstances surrounding Igboho’s arrest, they  called on the Federal Government to dissipate the same energy and resources used on the Yoruba and Biafra agitators in dealing with bandits and terrorists in the North.

”If half of the energy deployed to apprehend Nnamdi Kanu(leader of the Indigenous People of Biafra) and Sunday Igboho had been deployed to deal with the menace of terrorists and bandits who kill, rape, rob, and kidnap people, we would not have been in the unfortunate security mess that we are presently’’ said  Afenifere’s

ARG, in a statement by its Chairman. Olawale Oshun, and Secretary, Ayo Afolabi,  alerted the international community to what it called the violent abuse of the rights of Igboho.

The group said: “It is mind-boggling  that Nigerian central government’s concerted effort to ground the peaceful pursuit of self-determination by Mr. Adeyemo is not commensurate with its groveling attitude towards murderous herdsmen, whose plan to overrun Yorubaland and turn it into a terrorised space is not hidden – but for the solid determination of Yoruba governors.

“Similarly, we have not seen such concerted effort directed at checkmating bandits who have turned the country into a war zone.

”This appears to be a blatant case of ethnic discrimination. ARG invites the central government to concentrate on solving the problems that precipitated all the crises presently confronting Nigeria rather than selectively bullying its citizens on the basis of ethnic nationality.”

Ohanaeze Ndigbo Worldwide said it would be futile to go after the likes of Igboho without addressing the fundamental issues of injustice.

Its spokesman, Alex Ogbonnia, said another Igboho would emerge so long as the problems persisted.

Ohanaeze believes Igboho rose in defence of victims of killer-herdsmen.

“The herdsmen would kill, maim and rape women at random. All entreaties to the Presidency for swift action against the AK-47-wielding herdsmen appeared to fall on deaf ears.

“Igboho, in a patriotic heroic zeal, intervened to save the rural farmers, women, and children from the daily menace of the herdsmen,” the group said.

It urged the Presidency to embrace equity, justice, and fairness in public policy formulations and execution.

“The cause of the agitations is the obvious injustice in federal public policies,” Ohanaeze said.

It said that it was regrettable that the same government has failed  to declare armed herdsmen and their group,  the Miyetti Allah Cattle Breeders Association, as terrorists.

The group said the selective arrests of mainly agitators of Southern Nigeria extraction: “whilst pampering and petting terrorists is at variance to Chapter 4. Section 42 of the Nigerian Constitution which represents the Right To Freedom From Discrimination.

HURIWA added that the Muhammadu Buhari administration  has clearly demonstrated to the World that it is “only out to stop crusaders in Southern Nigeria who have effectively activated mechanisms for checking and slowing down the incessant violence and terror attacks against communities all over Southern Nigeria by armed Fulani militia supported by Miyetti Allah Cattle Breeders Association”.

But, the CNG, which backed  the arrest of  Igboho, called on the Federal Government to go a step further by  exposing his sponsors and those of IPOB.

It described Igboho and Kanu as “thugs” used by the Southern elite to cause “uprisings and disturbances” in the guise of self-determination.

CNG, in a statement by its  Spokesman, Abdul-Azeez Suleiman said: “The arrest of Igboho is government business and so long as it conforms with the principle of rule of law and international criminal justice procedures.

“We are not yet sure what he is going to be charged with, but expectedly incitement to violence against Northerners would be one of them.

“We all know that threats of violent secession anywhere is a grave offence that no government will condone.. With the arrest of Kanu and now Igboho, we are hoping that government would go beyond prosecution to digging up and exposing their sponsors and the agenda behind them.

“While  Kanu’s case may be attributed to some form of insanity which was exploited by the Southeast elite who were playing a double game, Igboho is a deliberate and calculated, supported and encouraged attempt by the Yoruba leaders, including their governments to scare the North into agreeing to cede power without competition.”