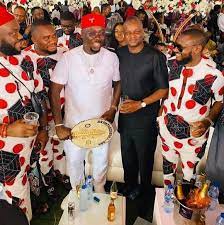 The Anambra State Police Command has kept mum on whether or not it would arrest and prosecute naira abusers at the burial of the mother of the Chairman of Cubana Group, Obi Iyiegbu, popularly known as Obi Cubana.

According to Section 21 of the Central Bank of Nigeria  Act, 2007, a person who sprays the naira risks imprisonment for a term not less than six months or a fine not less than N50,000 or to both.

CityNews Nigeria gathered that Obi Cubana has been a social media sensation and the rave of the moment, especially with the ‘naira rain’ at the event in Oba, a town in the Idemili South Local Government Area of Anambra State. Several videos went viral that show celebrities, business people and politicians spray money indiscriminately during a concert held after the interment of the deceased.

When contacted, the Police Public Relations Officer in Anambra State, Ikenga Tochukwu, told our correspondent to send a text message to his line. Our correspondent called him back and he said, “I will respond.” However, he had yet to respond as of the time of filing this report as subsequent calls to his line rang out.

Similarly, spokesman for the Economic and Financial Crimes Commission, Wilson Uwujaren, said the anti-graft agency won’t reveal its plans on the matter.

When asked in a telephone interview whether the EFCC would go after naira abusers at Obi Cubana’s funeral, Uwujaren said, “We do not give out the plans of the commission.”

Many Nigerians are, however, divided on the spraying of naira, its acceptability and otherwise. Technology and financial expert, Adamu Garba, said that there was the need for the apex bank to increase advocacy and sensitisation through its Clean Notes Policy.

Commenting, Garba said, “In as much as we wish the late mother of Obi Cubana a blissful paradise rest, it is important for us to also value our currency because as much as you try to throw currency all over by marching it, you are showing less value for the currency. There is a civil way of giving out money in celebration and the best way to do that is to hand over money in a very tidy way so as to value the currency that is also running the value of your country’s economy.

We should look at the mood. Trying to point finger at Obi Cubana as the person the CBN should hold responsible might not be justified. Why? Because he doesn’t control the crowd that was there; some of the people there were visibly and happily drunk and were spraying money and you cannot control them. Except if CBN is going to look at the videos, pinpoint them and make them accountable individually but I think the CBN should spend more money enlightening the people on the value of the naira than using a prosecutorial tone.”

Also, civic advocacy group, Human Rights Writers Association of Nigeria, in a statement by its National Coordinator, Emmanuel Onwubiko, on Monday, said the spraying of naira at Obi Cubana’s event should not constitute a major talking point, adding that there have been countless of high societal functions where the naira was also abused.

“The fact that friends and well-wishers who attended the event decided to show appreciation to Mr Obi Cubana, we in the Human Rights Writers Association Of Nigeria, think it should not become the talking point.

“The Central Bank of Nigeria under the current dispensation should rather be tasked by the media to confront the much more disturbing issue of how terrorism is funded and how armed kidnappers made up of Fulani militia in the North carry out their terrorism-related activities.”

Activist Deji Adeyanju stressed that the display of wealth by Obi Cubana and his guests were capable of luring young people to committing crimes.

He said, “I do not know what they do and I do not question the legitimacy or otherwise of their income. However, societally, what they did is capable of instigating young people into crime because no matter how we look at it, we must do things within societal norms.

Efforts to get the comments of Obi Cubana proved abortive as he neither took his calls nor responded to a text message sent to his line by our correspondent on Monday evening.