Home » News » PDP: Can a divided house bounce back?

PDP: Can a divided house bounce back? 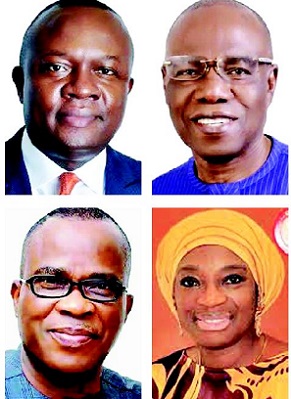 The Peoples’ Democratic Party (PDP) touts itself as a platform that has what it takes to wrestle power from the ruling All Progressives Grand Alliance (APGA).  Although the party parades high calibre politicians, the division within its ranks may prevent it from reclaiming the state it lost to the ruling party 16 years ago. Southeast Bureau Chief NWANOSIKE ONU, who has been following the happenings, reports

As the November 6 governorship election in Anambra State drawers nearer, there are doubts whether a major opposition in the state, the Peoples’ Democratic Party (PDP), can occupy the seat of governance.

This question has been loud on the lips of commentators, who are miffed over the deepening struggle within the party.

It is on record that PDP relinquished power in 2006, when former Governor Chris Ngige lost the position through a court verdict to Mr. Peter Obi, who contested the 2003 election on the platform of the All Progressives Grand Alliance (APGA).

Since then, APGA has been in control in Anambra State. But PDP, alongside other political parties, have been struggling to dislodge the ruling party.

To some, Anambra State is a PDP state, considering the calibre of names the party parades. They include, but are not limited to Peter Obi, Prof. Alphonsus Nwosu, Senators Joy Emodi, Ben Obi, Chief Josephine Anenih, Chief Chris Uba. Yet, the party has not been able to coast through to the seat of power largely due to internal wrangling.

But, another opportunity to reclaim the state is presenting itself for the party.  However, observers say if that must be, then, the party must put its house in order.

On November 6, Anambra State will go for the election, to elect who will succeed the Governor Willie Obiano. But, the PDP’s preparations for the poll are being hampered by the constant infighting, rancour and campaign of calumny.

In fact, the same intra-party acrimony reared its head, as the party prepared for the last primary that produced its candidate.

One of the factions, led by Sir Chukwudi Umeaba- led executive, elected Senator Ugochukwu Uba as the candidate.

The other faction, led by members of the Board of Trustees (BoT), led by the National Working Committee (NWC), held theirs at the Prof. Dora Akunyili Women’s Development Centre.

It was spearheaded by Benue State Governor Samuel Ortom and attended by who is who in PDP and Mr. Valentine Ozigbo emerged the winner.

At the Saint Paul University field in Awka, the chairman of the electoral panel, Obidi Ebede, said 665 delegates were accredited with Senator Uba scoring 275 votes.

According to Ebede, “from the result here, it is clear that Ugochukwu Uba scored the highest number of votes and hereby declared the winner and candidate of PDP for the November 6 governorship election in Anambra State.”

Four of the aspirants were in attendance at the Paul University venue and they were, Chief Ubaka Okeke, Mr. Godwin Ezeemo, Dr. Ugochukwu Uba and Chief Jonny Maduaforkwa.

Also, a former member of PDP’s BoT, Chief Chris Uba, and other chieftains were in attendance.

Others at the venue included contestants like Val Ozigbo, Dr. Obiora Okonkwo, Hon Chris Azubogu, Dr Godwin Maduka among others.

The Deputy Governor of Edo State and the Secretary of Anambra Governorship Primary Electoral Committee, Comrade Philip Shaibu, had announced that three aspirants withdrew from the race.

The aspirants, according to him, were Emeka Etiaba (SAN), Dr. Tony Nwoye and another whose name he did not mention.

After the primary, it was announced that Ozigbo won with 62 votes, while second place went to Okonkwo who got 58 votes.

The question is: who will rescue the once vibrant party in Anambra from the current quagmire?

Since the primary, the party has been going through one trouble or the other, with members of the BoT trying to bring everyone to the table. The party’s ticket has been a subject of dispute between the two factional candidates, Ozigbo and Uba. Last week, the Independent National Electoral Commission (INEC) could not determine the authentic candidate.

But, a High Court ruling on Monday in Awka has put paid to the matter for now, as Justice Obiora Nwabunike ordered INEC to recognize Uba as the candidate because Ozigbo did not vacate the earlier ruling in Abuja before the so-called Super Delegates Primary that produced the former Transcorp CEO as the candidate was held. Justice Nwabunike said the party’s NWC ought to have vacated that order before proceeding with the primary. But, the battle for the PDP ticket is not over yet. The party has about five cases on the primary still pending. So, the situation can change at any moment.

Okonkwo who came second in the mainstream primary that produced Ozigbo as the candidate, has called on his supporters to keep calm and wait for further directives. From all indications, he might defect to another party to realise his ambition.

He faulted the primary, alleging the exercise was heavily compromised. Okonkwo said: “Our expectation was that the wishes of the people would be allowed to prevail. It is obvious that the outcome of that exercise did not reflect your wishes and desires. Just like you know, our campaign team expected a different outcome, which would be a true reflection of your choice and the reality on the ground.

“Obviously, there were a number of serious issues and irregularities regarding the primary election. First, in response to conflicting court judgments, the party decided to use super delegates in clear breach of its own constitution and in the process disenfranchised its statutory delegates who are the soul of PDP in Anambra State and who have been working in the past three years to reposition the party and sensitise the people for the simple reason that they were afraid of the choice that they might have made.

“However, there was a court judgment and order validating the Ndubuisi Nwobu-led executive, which the party ought to have upheld and respected as the first in time. The NWC of the party decided, at the last minute to limit the voting to a small number of super delegates. Even with that, the list of the super delegates kept changing such that voting was unduly delayed after the first round of accreditation where 179 super delegates had been accredited.

“Perhaps, the most blatant of the irregularities came in the collation of votes. For instance, a total of 218 super delegates were finally accredited for the exercise. The tally of votes cast for the candidates, along with voided votes came to 200. A full week after the primary election, nobody has satisfactorily explained what happened to the other 18 votes cast by duly accredited super delegates. We expect those who conducted the election to provide the answer to this.”

Okonkwo maintained that there are many questions begging for answers, adding that he is waiting for them to come. While submitting that consultations are still ongoing, he, however, promised to make his decision on June 26 primary election known thereafter.

Maduka, the United States-based doctor and one of the aspirants, has also perfected arrangements to pursue his ambition elsewhere. Maduka said his aim was to contest the election to better the lives of the less privileged persons in society. He told The Nation that he would wait for the party to finish their consultations and if they are not favourable, a decision would be taken.

However, Ozigbo has not given up the fight to win the election for his party. PDP leaders, including the former Vice President, Alhaji Atiku Abubakar, Enugu State Governor Ifeanyi Ugwuanyi and National Chairman of PDP Uche Secondus have been sending congratulatory messages to him.

Ozigbo also enjoys the endorsement of Bayelsa State Governor Duoye Diri, who pledged his unalloyed support for the factional candidate. Diri described  Ozigbo as a “great businessman with a strong capacity to provide effective leadership, urging the people of Anambra State to rally around the PDP candidate. He further assured Ozigbo that the PDP leadership would mobilise resources to support for him and ensure he wins at the poll.

Ozigbo told The Nation that the election is not going to be a walk in the park. This, according to him, is because the PDP is up against an incumbent governor and a candidate with the backing of the Federal Government.

He added: “So far, we have visited all the communities in the 21 local government areas of the state and have endeared our vision to the people of Anambra. Though our chances are bright, we have to be consistent in selling our message of prosperity and transformation.”

But, Senator Ben Obi said the PDP would no longer condone what he called the rascality in the Anambra PDP. Obi, who is one of the BoT members from the state, called for sanctions on PDP members who take the party to court, who “move around with court orders in their pockets”.

He said: “As far as we are concerned, Val Ozigbo has emerged as the candidate of our party. He won the primary, recognised by the leadership of PDP held at the Women’s Development Centre and all of us in the BoT congratulate him.”

Also, Senator Joy Emodi, who lost her mother recently, and Chief Josephine Anenih, one time Minister of Women’s Affairs, toed the line of Obi. Emod, said that PDP must recover Anambra State from the opposition party in the November election, because the state, according to her, belongs to the party.

Analysts are of the opinion that if the party leaders could come together and agree on some issues, that no party will stand on their way.