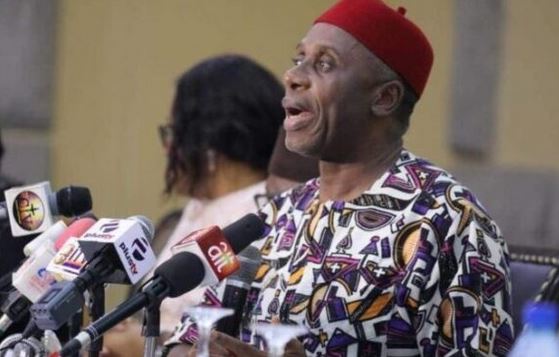 Nigeria’s minister of transportation, Rotimi Amaechi, has said that the administration of former President Olusegun Obasanjo spent between €300 million and €400 million on equipment for fighting insecurity in the maritime sector.

The minister alleged that the equipment purchased is no where to be found.

Amaechi said this at the inauguration of the Integrated National Security and Waterways Protection Infrastructure in Nigeria (also called the Deep Blue Project) at the ENL Terminal, Apapa Port, Lagos.

The event which took place on Thursday was attended by President Muhammadu Buhari.

Amaechi said Obasanjo spent up to €400 million on a similar project to fight insecurity in the maritime sector.

But he claimed that the equipment “disappeared”.

The minister accused the Nigerian elite operating in the sector of unpatriotic acts.

The minister said a war was waged against him during the implementation of the project by stakeholders in the industry, but that he was determined to complete the task.

“Just because of this project, three committees were set up against me; one led by the vice-president, one by the minister of defence and another by the EFCC,” he said.

“While they were set up and all of them were cabinet committees; the accusation was this is Amaechi’s contract. Mr. President, I don’t do contract.

“But I want to tell you why I did it. Nigerians are not patriotic, most elites are not. They were making billions of money in insecurity. Anybody who wants to fight insecurity, they will fight the person and I was very determined.

“I am surprised that the MD of Shell read his speech without saying that the oil companies met and promised me a gift if I can survive in this war. This war has sacked two ministers, they were taken to the EFCC and they were sacked.

“This war, under President Obasanjo; they spent between €300 million and €400 million to buy the same equipment we have bought and they have disappeared.

“Until the day you sack me or I leave office, I will make sure that this equipment remain because Nigerians who do business on the water are not good people. Most unpatriotic Nigerians are not good.”

In his address, Buhari expressed confidence in the project, saying it will boost maritime security infrastructure and improve law enforcement.

“I am confident that the project, which provides a robust maritime security architecture, will enhance maritime domain awareness capability and improve law enforcement action, particularly in the prosecution of suspects under the Suppression of Piracy and other Maritime Offences Act which I signed into law in June 2019,” he said.

“This flag-off is an important step in the continuing shift in strategic action about regional maritime security.

“It will serve as a benchmark for member states in the Gulf of Guinea and other relevant stakeholders to further develop innovative strategies and align efforts with the subsisting framework to improve maritime security in the region.”