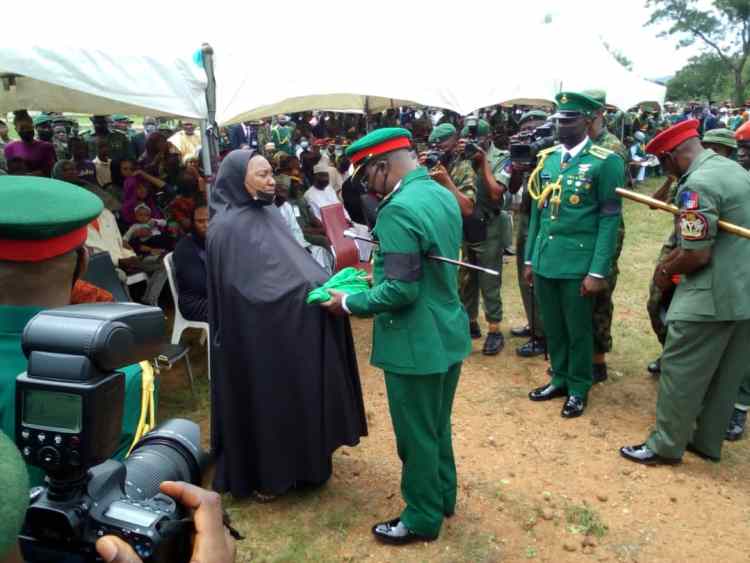 The remains of Major General Hassan Ahmed, have been committed to mother earth after a military ceremony, which took in Abuja on Friday.

Major General Ahmed was killed on Thursday, July 15, 2021 by gunmen along Abuja-Lokoja highway while his sister was kidnapped.

He was recently appointed Director of Veterans Affairs at the Army Headquarters, an office he was yet to resume.

The Chief of Army Staff (COAS), Lt Gen Faruk Yahaya, said the incident was sad and shocking for him.

“It is in deed sad and shocking incident given the circumstances of how it happened but we can’t question God, His will will always be done. All of us are on the way, it’s only that we don’t know when. That is reserved for God.

“He had to go to that place for him to go there, all of us have our chosen places where our lives will be taken. It is very painful but we can’t question God,” the COAS said.

The COAS, who was quiet on the Nigerian Army’s next move following the assassination of a senior military officer, however, added that the military will ensure prompt payment of his entitlements.

He added that his administration will improve on the welfare and entitlements of personnel killed in active service.

“To us behind, we owe it a duty to take care of the family he left behind and to be with them in this time of need.

“The NA has provisions as contained in our laws, what are the entitlements and other duties and responsibilities to our beloved colleagues when they pay the supreme price.

“The Army will do like that as contained in our provisions. So, the chief of administration should check and ensure that these things are done.

“And beyond that, the Army under my watch will improve these provisions and we will be with family of Maj Gen Ahmed and all those who paid the supreme price both officers and soldiers and their families.

“Ahmed is a friend and colleague. We’ve been together for a very long time, very dutiful, responsible officer, a professional officer but everyone has his time. That is Ahmed’s time and we have laid him there,” General Yahaya said.

He further urged mourners to continue to pray for the slain officer even as he tasked the Army to provide all his entitlements and always remember the family of Maj Gen Ahmed and all other officers and soldiers who have paid the supreme price in the defence of the country.

Reading his funeral oration, the Chief of Policy and Plans, Major General Anthony Omozeje, said the late senior officer was a professional officer that was committed to his duties.

“He was a calm, firm but fair officer with a good sense of purpose and responsibility. He was a forthright gentleman and a professional military police officer who was genuinely committed to his duties. He had a remarkable conduct and overwhelming moral standard.”

“It is very difficult to describe his personality, he was a personification of a complete gentleman officer. He was very reliable, honest and straight forward, he is also firm and professional.

“I am yet to see anybody that had cause to exchange words or argue with him. It’s not as if he doesn’t disagree but he had a way of dealing with situations.”