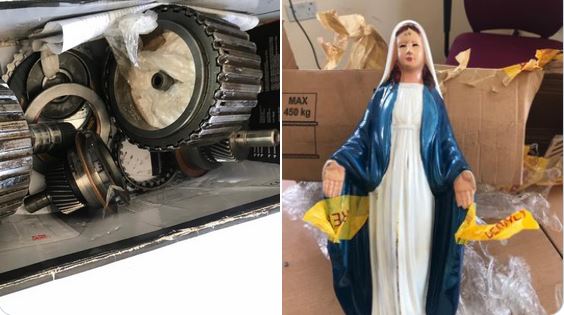 The National Drug Law Enforcement Agency (NDLEA) has revealed that it found 140 grammes of methamphetamine concealed in a religious statue, en route the Philippines.

Femi Babafemi, the agency’s spokesman, disclosed this in a statement on Friday.

According to the NDLEA spokesman, 3.1 kilogrammes of cannabis concealed inside spices and local herbs were also intercepted in a package bound for the United Arab Emirates (UAE).

Babafemi said the illicit drugs were sized in courier companies in Lagos state.

“The narcotics agents from the Directorate of Operations and General Investigations seized 500 grammes of heroin going to Canada and hidden inside auto spare parts from one of the courier firms, while 140 grammes of Methamphetamine going to Philippines and concealed inside statue of Mary was seized in another courier company,” he said.

In a related development, the NDLEA command in Ondo state arrested 31 suspects — 24 males and seven females — while 275.552kg of assorted drugs was recovered.

The agency said the arrests were made between April 6 and April 20.

NDLEA said the operations were “carried out to curb the increasing rate of drug abuse among the youths and even the elderly in Ondo state”.

The agency added that the drugs seized “consist of 74.285kg of cannabis sativa, 267grammes of psychotropic substances: 201kg of skuchies (a combination of cannabis, tramadol, ethanol, and zobo), while many of the drug spots have been dismantled”.

In a similar operation, the NDLEA command in Akwa Ibom intercepted and seized 62.150kg of illicit drugs in Oron and Uyo LGA in the state.

Four suspects were said to have been arrested in the two operations carried out on Thursday and Friday.

Buba Marwa, NDLEA chairman, commended the various commands for the seizures and arrests, and urged them to do more to tackle the scourge of drug abuse and trafficking in the country.