Marwa, NDLEA and the Houdini act 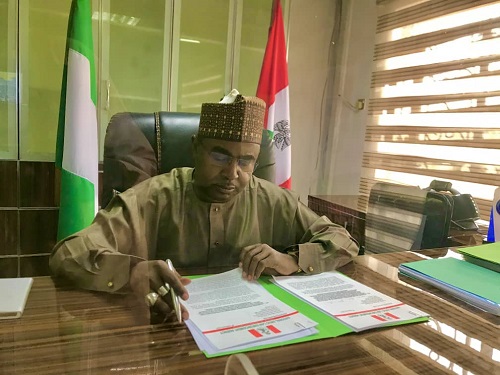 One of the things Nigerians have grown accustomed to in the past three months is the constant piece of news about arrested drug traffickers, stories of intercepted consignments of illicit substances, and heartwarming reports of commendations from governments of other countries about Nigeria’s serious efforts to curb and combat drug trafficking and drug abuse.

This has become a sort of weekly digest. For ordinary Nigerians and the elite, there is suddenly light about the pervasiveness of drugs in Nigeria. And for the country’s anti-narcotics organisation, the National Drug Law Enforcement Agency, NDLEA, there is a gale of public appreciation. Hence, it did not escape the notice of the public that there is a new approach to the war against drug abuse and drug trafficking. Or that the country has entered a new phase in the war against illicit drugs.

While this is a welcome development, it is not altogether surprising. Since President Muhammadu Buhari appointed Brig. Gen. Mohamed Buba Marwa (Retd) Chairman and Chief Executive Officer of the NDLEA in January, 2021, public expectation has been high, because, Marwa, to borrow a popular cliché, “came highly recommended.” With the pedigree of a highly efficient manager and turnaround specialist, based on his impressive Curriculum Vitae as a military administrator, notably of Lagos, there is a great expectation that Marwa is the man that can turn around the fortune of the country’s drug control agency and give its activities more bite so to speak. Moreover, having served as chairman of the Presidential Advisory Committee for the Elimination of Drug Abuse, PACEDA, between 2018 and December 2020, it is not farfetched to assume that the new NDLEA helmsman will effect a paradigm shift in the war against drugs.

In short, the public was not assuming too much about Marwa. And this time, as it was in the past, he delivered. Barely a week after he resumed, the results started coming in, first in trickles, then, now, in torrent. The result speaks volume. The war against drugs has never been this effective.

Launching non-stop actions against drug cartels across the country with the new maxim “offensive action”, the NDLEA under Marwa in less than three months produced unprecedented results, among others, the arrest of 2,175 drug traffickers and the seizure of 2,050,766.33 kilogrammes of assorted illicit drugs, filing of about 2,000 drug cases in court with 329 convictions and 1,549 pending cases in court and cash and drug seizures valued at over N85 billion.

How Marwa did it is no Houdini act; what he did was more of a management masterstroke. It is not that the NDLEA has to recruit new officers. Not at all. The unravelling feats are the work of the existing workforce that he took over. What he did was simple. He showed a keen understanding of the effect of motivation on the human psyche. By boosting the morale and confidence of the officers and men of the NDLEA through practical steps that addressed all existing welfare and career stagnation issues, he successfully transformed the workforce into an elite drug-fighting force operating at its maximum capacity.

The connection between productivity and motivation is no rocket science. And Marwa did his homework well before taking over the agency. As he explained: “One of my early findings is that the morale of the officers and men has dropped to the lowest ebb. This has made the personnel become poorly motivated. We need highly motivated personnel to win this war, which we must win by the grace of God.”

Hence, he had undertaken a re-engineering of the agency for optimal performance, starting with the seven-member harmonisation committee to address all forms of distortions hampering the smooth running of the Agency.

Aside from addressing crucial issues that dampen morale, such as perennial promotion and stagnation, he showed his leadership qualities when he moved around the commands to hold personal pep talk and to give assurance to agents across Nigeria. He further raised the bar by instituting a bi-monthly assessment and cash-backed award for Best Performing Command to motivate officers and men. To cap it all, Gen. Marwa took the bold step to create additional directorates to reposition and enhance the performance of the agency. Having done all these, one would not expect the agency to remain the same again.

Without resting on his oars, Marwa ramped up his efforts by engendering a conducive ecosystem for the NDLEA’s new battle plan. This he did by drawing unprecedented goodwill for the agency through advocacy visits to governors and other stakeholders. This will no doubt take him weeks of tireless crisscrossing of Nigeria from East to West to North, meeting stakeholders in capital city centres and town halls and selling them the new philosophy of war against drugs and shoring up their belief that now is the time to make a definite stand against the trade and trafficking drugs. Not surprisingly, his effort wins support, unprecedented solidarity from various constituents of society including religious groups, student bodies, legislators and labour. In three months, Marwa has been able to build and still building an overwhelming coalition against drug trafficking in Nigeria. He found a way to further get the public committed to the cause by setting up a Special Purpose Committee to involve stakeholders in the war against illicit drugs.

He brought NDLEA out of the shadows into the limelight, all in three months. With a blister of performance, the new NDLEA chair has successfully steered the agency to global visibility and opens a vista of international support from the EU, United States, UK, Germany and France as well as from UNODC. Commendations from some of the countries were backed up with donations of matériels, including operational equipment like speedboat, motorcycles, armoured shields, helmets and walkie-talkies. Some of the international partners, represented by ambassadors, consul-general and senior consulate staff had visited the NDLEA headquarters to convey their governments’ compliments and explicitly pledge more support. For the first time in a long while, the world looks to Nigeria as a leader in the fight against drugs in the West Africa region.

Marwa in three months has matched his promise to dismantle drug cartels in the country with positive actions and good results.

Beyond this, Marwa has within this period repositioned and strengthened the Agency’s Directorate of Assets and Financial Investigation, DAFI, which is currently investigating a number of Politically Exposed Persons, PEPs and Financially Exposed Persons, FEPs, over suspected drug dealings. Unknown to the public, the NDLEA is empowered by law to do this and in the last three months has been doing a lot in that area. A particular case that will most likely interest the public is the ongoing investigation of a high profile money laundering scheme involving over 30 billion Naira. The perpetrators are suspected exporters of controlled drugs to UK and United States of America. The syndicate was suspected of laundering the proceed of drug dealing by creating complex layers of transactions using intermediary companies as a sham and mask to avoid recognition by law enforcement agencies. Some of the cash and assets already seized and forfeited by drug traffickers and barons within this period include: One Hundred and Fifty Nine Million, Four Hundred and Sixty Thousand Naira (N159, 460,000.00) taken from a suspect who was arrested at MMIA, Lagos and is standing trial on the charge of exportation of 6.45 kilograms of Cocaine alongside his accomplice, now at large; the sum of Thirty One Million Naira (N31, 000,000) belonging to a suspect who was arrested with Cocaine at the MMIA; and Eleven Million Naira (N11, 000,000) realised from the sale of the assets of a  United States-based Nigerian, arrested and jailed for drug trafficking in UK. In the same vein, within this period, an interim forfeiture of assets worth millions of Naira belonging to a baron who was the head of a drug cartel that trafficked illicit drugs to Asia, Canada, US, Ghana, South Africa, Namibia and Nigeria. The seizure and forfeiture of his assets in no small way dealt a deadly blow to his drug cartel.

No doubt, the magnitude of Marwa’s achievements of so much in so little time is better captured in the words of Kris Hawksfield, regional operations manager, West Africa, United Kingdom Border Force: “The result NDLEA is recording is far above any one organisation under our project across the globe.” Need I say more?