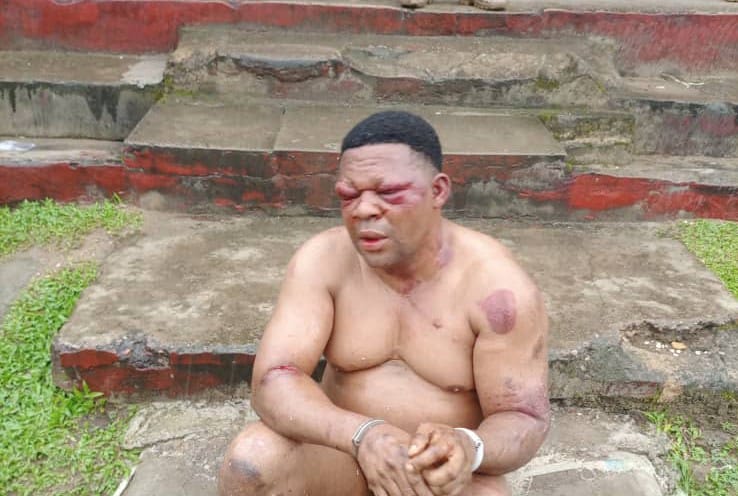 A man, Esuk Otu said to have masterminded the looting of the Calabar International Conference Centre has been battered following his arrest by the police in Cross River State.

Recall that police also arrested 80 other hoodlums involved in the looting.

According to the Commissioner of Police, CP Abdulkadir Jimoh, over 1000 items, including customised chairs, chillers, customised designer carpets have been recovered from the search and retrieve hunting so far.

Jimoh who disclosed this on Monday, October 26, 2020 in Calabar, said the Command arrested one Johnson Richard Inem, the mastermind behind looting and vandalization of the CICC at the weekend.

He said Inem, who is a mechanic was arrested at Esuk Otu behind Nigerian Television Authority, NTA, Calabar, with various items.

“We arrested the suspect based on actionable intelligence during the house to house search which started on Sunday in the state.

“We have arrested over 80 suspects and they are under going interrogation in various security facilities. Looters have 24 hours to return all looted items before the house to house search gets to them as recovery of looted items is on going.

“We have put plain cloth personnel in place to cultivate intelligence to ensure that all perpetrators, receivers are arrested and brought to book. Anyone still with looted items in their possession is warned to return them within the next 24 hours”, the Police Commissioner said.

He added that, “So far, we recovered over 1000 customised chairs, chillers, rug carpets, Air Conditioners (ACs) and many other items that were yet to be labelled from the CICC suspect.

“We are not resting on our oars, we also want to urge traditional rulers and religious leaders to make announcement in their various domains by urging those who took government property to return them immediately”.