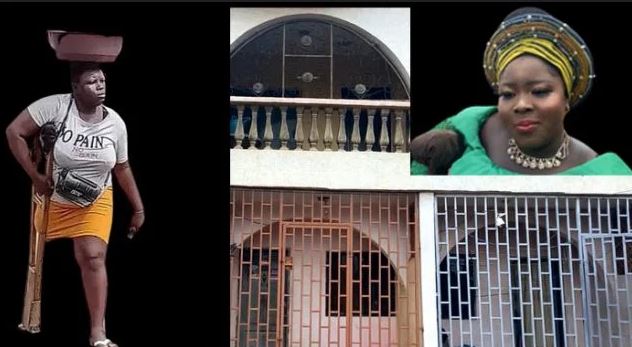 Sunday PUNCH reports that the story of Mary Daniel, a 27-year-old single mum amputee who hawked bottled water on the highways in Oshodi, Lagos, has seemingly ended happily as she opened a N17.5m storey building she bought from donations made by generous donors within and outside Nigeria.

On the expansive premises of the house in the Igando area of the state, a sachet water factory belonging to Daniel is also nearing completion. The house comprises four apartments of two bedrooms each. The house-warming held on Saturday in the presence of Daniel’s kinsmen led by Onu Igala in Lagos, Sanni Yakubu.

This is just as the elated landlady said she had forgiven her father for allegedly abandoning her.

Daniel came to the limelight in March after Saturday PUNCH reported her uncommon courage to eke out a living by hawking water in traffic.

She had told our correspondent that her parents died in an accident where she also lost her leg.

Dropping out at Junior Secondary School 3, she took to the streets in Onitsha, Anambra State, selling sachet water to cater to herself and her aged grandmother.

She was impregnated in 2018 by her fiancé who she said denied responsibility for the pregnancy, forcing her to relocate to Delta State out of shame.

The native of Kogi State continued the taxing trade in the oil-rich state even after giving birth. She relocated to Lagos in March, hawking bottled water in chaotic traffic and passing the night on the balcony of a building on Suwebatu Street, Oshodi.

She received N25m in donations but in the heat of solidarity her story attracted, her family disclosed that her father is alive and that her mother died from sickness.

They stated that her leg was crushed by a tyre rim at a tender age while she was playing around the vicinity.

Speaking to Sunday PUNCH during the ceremony, Daniel said she claimed her father was dead because he abandoned her from childhood.

She explained that she changed her name from Ojonuga Blessing Onu to Mary Daniel out of annoyance against her father, adding that she twisted the circumstances surrounding her mother’s death and the amputation of her leg to curry favour from the public.

Daniel stated, “I am happy for the house and the factory. I decided to settle for water business because it is the source of my success. I have bought the equipment and generator; it remains fixing doors and a vehicle for distributing the water.

“I said my father was dead because he did not take care of me. He said he didn’t want a one-legged person in his family. He disowned me so I decided to change my name from Ojonuga Blessing Onu to Mary Daniel.

“After people donated money to me, his family begged him to reunite with me but he refused. I have forgiven him for what he did to me but I can’t accept him as my father.”

She said her daughter now lives with her and has been enrolled in a school. “I thank Nigerians and everyone for helping me. I am also grateful to the Lagos State Government,” she added.

Daniel’s cousin, Seidu Amuna, who spoke to our correspondent on the telephone on Saturday, confirmed that the father disowned her.

He said, “Her father is my uncle. He and his late wife (Daniel’s mother) were not on good terms before she had the accident when she was playing. As of the time she was carrying her (Daniel’s) pregnancy, they had a misunderstanding and parted ways. When she gave birth, the issue was resolved and she accepted Blessing as his child.

“Blessing was about five years old when she and her mother travelled. The accident happened where they went. After her leg was amputated, he said she did not belong to him. We asked him if it was because of her condition but he said no. Up till now, he never explained what happened between him and Blessing’s late mother. I personally begged him after fortune found Blessing to accept her but he said ‘over his dead body’.”

When contacted, Mary’s father, Onu, outright disowned her, saying, “I don’t have any amputee daughter. I am not her father.”

The Onu of Igala in Lagos, Sanni Yakubu, said the property was verified from the Lagos State Government before it was paid for.

He said, “We informed the Ministry of Justice and invited a surveyor who verified the property at Alausa. She bought the house for N17.5m and did some repairs. She resides in one of the four apartments and let out the remaining three. There are also three shops in front of the house. With about N1.5m, the sachet water factory will be ready and she can start the business.”