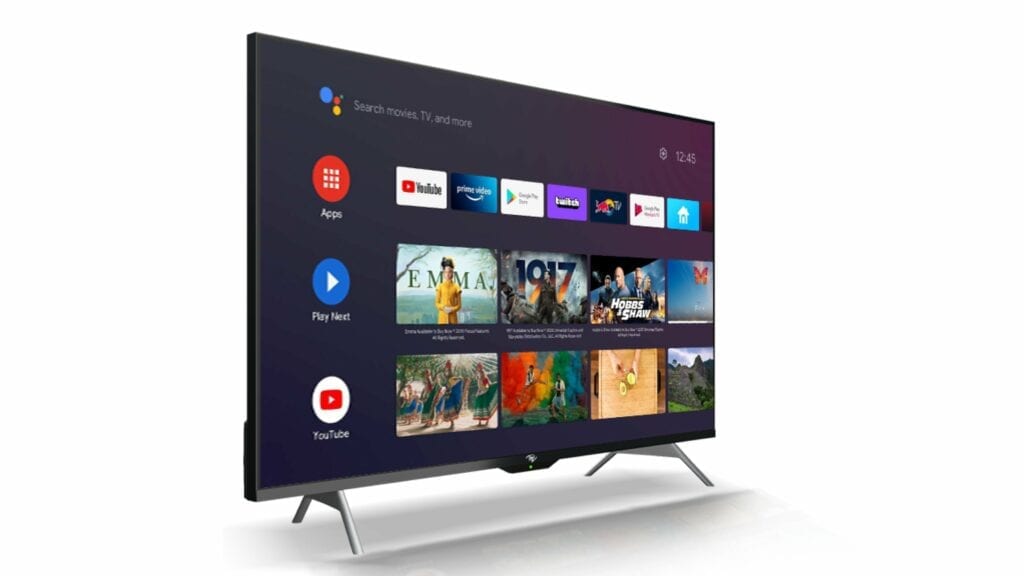 Itel G Series LED TV (G3230, G4330, G4334, G5534) is a series of Android TV launched alongside the Itel A Series LED TV, C Series, and I Series. It is available in 4 sizes ranging from 32 to 55 inches screen. It is available in HD, FHD and 4K UHD displays and offers 170° viewing angle. The television comes with up 2GB RAM and 8GB inbuilt storage, 24W speakers and supports Dolby Audio. It has a Bluetooth remote with voice control functionality.

Even with the frameless design, this Itel TV series still host adequate ports for peripheral connection. Thanks to the smart built in OS the Itel G series LED TV has pre-installed APPS that offers access to favourite shows, and movies.

The Itel G series LED TV comes with a flat, frame-less design with sleek body finishing made of plastic material. Its all glass front is surrounded by ultra thin bezels serving has a frame which hold the screen to the body.

This Itel TV is the perfectly design to complement your living room, reception or offices. It has a flat back panel which makes it perfect for wall mounting, as well as two wide leg spread perfectly to make it suitable for shelve positioning.

In addition, it comes with multiple interface ports positioned at the rear, including an 3 HDMI ports and 2 USB ports for the itel G4334 and itel G5534, while the itel G3230 and itel G4330 sports 2 HDMI ports and 1 USB port. There are also 1 AV input ports, 1 Coaxial and 1 RF Port for both model.

The 32-inch Itel G3230 TV has an HD display with 1366 x 768 resolution, and offers 170° viewing angle, thus promising an immersive viewing experience. It also comes with 400 nit of brightness and 3000:1 contrast ratios which offer brighter colors and more detailed images.

Itel G4330 TV on the other hand is a 43-inch TV with FHD display, a resolution of 1920 x 1080, thus, offering incredible clarity and vivid image display. It has 170 viewing angle, 400 nit of brightness, and 4000:1 contrast ratios to offers the best viewing experience.

Similar to the G4330, Itel G4334 is a 43-inch display TV, however, it feature a 4K UHD display with a resolution of 3840 x 2160 pixels which is 4 times higher resolution than Full HD (2K). It also the same 400 nits as the other series member with 1300:1 contrast ratios, so, it offers extraordinary details and intense color thus resulting to near-flawless viewing angles.

Lastly, the 55-inch Itel G5534 TV also features a 4K UHD display with a resolution of 3840 x 2160 pixels, and 170 viewing angle which result to crisp, colour saturated picture even when looking at the screen almost sideways. It also has 400 brightness nits, with 1200:1 contrast ratios for incredible display.

Itel G Series LED TV are build on an A+ grade display panel with panel with LED backlight display technology.

Itel G Series LED TV is a smart TV series built on powerful Android TV platform. The 32″ and 43″ model run on Android 9.0, while the 43″ (4K) and 55″ model run on Android 10. Thanks to the smart OS these TV offer best of advanced TV viewing experience with voice control and plethora of apps.

This Itel TV also comes with built in chromecast which seamless Entertainment. Therefore, you can stream what you are watching on your smartphone on your itel TV with just a single tap with built-in chromecast.

With the voice assistance, operating your TV has been made easier with voice command. You can now access almost anything on your TV, by just asking Google Assistant to get the work done.

Itel G Series LED TV also comes with immersive audio. The combination of the dual 12 watt box speaker and Dolby audio processing results in cinematic sound experience for a serene experience. The Dolby digital technology offers a 360° stereo surround sound effect that turn your every experience to a cinematic one.

The Itel G series LED TV price in Nigeria ranges between 50,000 Naira and 150,000 Naira. This TV series is available in Nigeria, Kenya, and Ghana. You can buy these TVs at reputable online stores, leading retail chains in your country.

Here are a few specs of the Itel G series LED TV :