I Use Human Skull To Treat People With Chronic Headaches – Herbalist 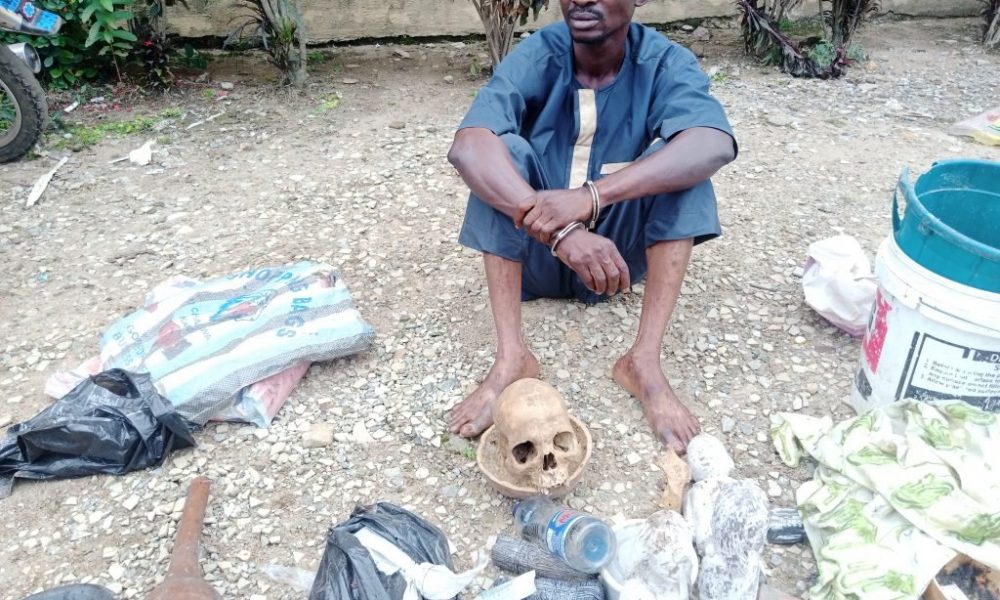 A man who claimed to be a herbalist has said he uses human skull to treat people suffering from chronic headaches.

The suspect who was paraded by the Osun State Police Command headquarters at ring road, Osogbo on Tuesday said he never knew possession of a dry skull is an offence.

Parading the suspects at the state police command in Osogbo, the State Commissioner of Police, Olawale Olokode, said the herbalist, Oyewo was apprehended along Ile-Ife/Ibadan road with one human skull, snail and voodoo.

The police statement reads: “On July 7, 2021 around 8am, the police patrol team on routine highway patrol along Ile-Ife/Ibadan road, intercepted one Honda Accord vehicle with Reg. No. AGL 412 CD black colour driven by the suspect a 38-year-old man, Semiu Oyewo of Alamole area, Ondo road, Ile-Ife, searched the vehicle and recovered the exhibits.”

Speaking with journalists at the police headquarter, Oyewo said: “I am an herbalist, I didn’t know that having possession of dry skull is an offence. I even fought with the mobile police that arrested me. I want to use it to treat someone who is suffering chronic headache,”

Police said during the course of investigation and interrogation, the suspect confessed that, he is an herbalist and bought the suspected human skull from his co-herbalist one Ige aka Igwe of Apomu who had absconded.

“The Police navigated its investigation to the house of the arrested suspected and recovered various ‘Juju’ and fetish items which they hid in the bush.”