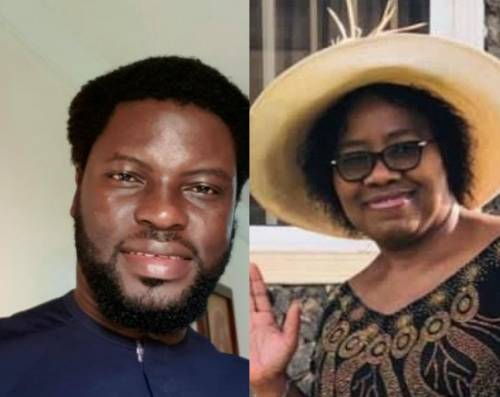 Some documents that have been obtained by SaharaReporters have revealed how Uchechi Precious Ikebujo, a former Personal Assistant to the immediate past Group Managing Director of the Nigerian National Petroleum Corporation, late Maikanti Baru, and her alleged young lover, Anderson Newton Warribo, fraudulently took over the ownership of a company, Apres Engineering Limited from its owner, Micheal Bakare.

Not satisfied, the duo through their lawyer, Daniel Momoh, wrote to the Corporate Affairs Commission (CAC) and removed Bakare as the Managing Director of the company.

They also logged him out of the company’s email without notice.

Speaking to SaharaReporters, Bakare said the situation made him depressed.

He said he had written a petition to the Economic and Financial Crimes Commission (EFCC) but the anti-graft agency did not act timely.

Bakare said, “In 2017, I relocated from Lagos to Abuja, trying to recover from the shock of failure in crude business that went sour. Getting here, I started selling the idea of crude oil logistics when my next-door neighbor in Rocky Base Estate, Karu, called Anderson Newton Waribo, showed interest.

“He told me that he knew a woman identified as Uchechi Precious Ikebujo who could invest in my idea and asked how much. I said all I needed was just office space and so I asked for 7million. We bought office equipment and simultaneously registered the company with the CAC. But I was shocked how Anderson made himself a stakeholder in the company registration without even letting me meet with the angel investor.

“I felt something was not right. I ignored it as I was desperate to get back in business. I, being the idea owner, emerged as the Managing Director with N10 million share capital of N50 million total share capital. After registration of the company and opening of its account, no monetary investment was made and non of these directors showed up at the job. I was really troubled so I started checking, checking only to discover that Anderson and Precious Uchechi Ikebujo are lovers, and both work at the NNPC.

“Ikebujo was at the time the Personal Assistant to the former NNPC GMD while Anderson was employed as her chauffeur for a cover-up. Anderson was living in her mansion in Asokoro while his flat was occupied by his mother and brothers.

“Some contracts came in from the Ministry of Works and there was about N33 million in the company’s account. One night, I got series of debit alerts from Sterling Bank through my phone number. I was worried about how the money was taken without my authorization. I needed to cosign before withdrawals would be made as a signatory to the account.

“I went to the bank and was showed how they forged my signature at the CAC. They lied that I resigned and I gave my shares away to them. I wrote to the ICPC and EFCC but they never responded until I got scared for my life and went underground as I was being threatened.

“Officials of the CAC must have connived with them because CAC never consulted me as MD of my company. The mysterious lawyer involved claimed I signed at his office. EFCC later called me for interrogation. Anderson was arrested and bailed without even inviting me to witness the arrest. The IPO in charge, Joseph Agboola, let him go without even involving Ikebujo. My lawyer, Barrister Tope Oloyede, expressed dissatisfaction with how the case was being treated but the IPO and his colleagues ganged up against him.

“There was no proof that I signed out of the company and most importantly, there was no financial exchange of my N10million share, yet this IPO called Agboola was forcing me to admit it.

“He took about 59 samples of my signature for forensic test and he never got back to me till date. If I called him, he would snap at me and end the call.

“Sterling Bank replied the petition I wrote that it was not in the position to ascertain or authenticate a forged document and that was why they never called me to find out if I thoroughly signed out my position in the company.”

Apart from the fraudulent act perpetrated by Anderson and Ikebujo, the action is also against Nigerian law which forbids public officers from engaging in private practice.

Part I, Fifth Schedule, Section of 2 (b) of the 1999 Constitution of the Federal Republic of Nigeria states that “without prejudice to the generality of the foregoing paragraph, a public officer shall not, except where he is not employed on full-time basis engage or participate in the management or running of any private business, profession or trade, but nothing in this subparagraph shall prevent a public officer from engaging in farming.”

Part 2 of the Fifth Schedule of the constitution defines a public servant to include; Chairman, members, and staff of local government councils, chairman and members of Boards of other governing bodies and staff of statutory corporations and of companies in which the Federal or state government has a controlling interest.

Ikebujo refused to comment on the matter and blocked the number used in contacting her by SaharaReporters.