Home » News » ‘How My Kids, Sister Died One After The Other’ — Father Of 10 Siblings Killed By Food Poisoning Speaks

‘How My Kids, Sister Died One After The Other’ — Father Of 10 Siblings Killed By Food Poisoning Speaks 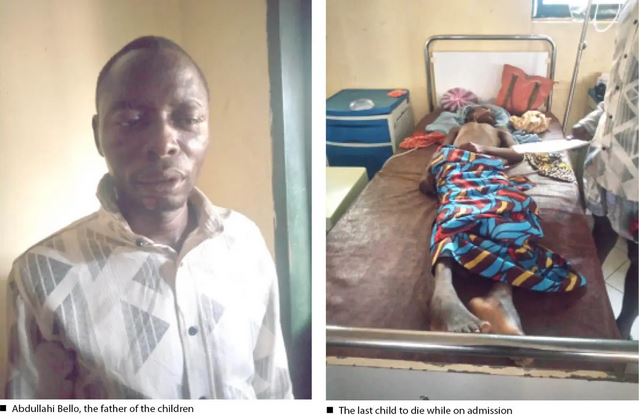 The children lost their lives after their aunt, who was on a visit to the family house, prepared tuwo, a local food, for them.

The children lost their lives after their aunt, who was on a visit to the family house, prepared tuwo, a local food, for them.

It was gathered that when the aunt arrived, she fetched grains from a silo and took it for milling and that after milling the sorghum a rabbit in the house died after eating the flour before she even started preparing the tuwo.

The father of the children, Abdullahi Bello, said after the meal the family became helpless as the children were dying one after the other.

Bello said, “Apart from myself and their mother, no one was left standing; they all died.

“For a family to lose such number of children in one fell swoop is really very traumatising. I could not sleep for days. My wife was admitted after she was hit by shock. The incident will continue to haunt us forever.

“We took the remaining children to a medical facility in Gusau and two of them died at the hospital. We took the remains of those who died back home and when we were burying them, we received a call that three had died again, including my younger sister that cooked the food for them. In totality, 10 children and my sister lost their lives.

“We have nothing to do except to submit to the will of Almighty Allah.”

Our correspondent further reports that an 11-year-old child, Sadiq, died after days of admission at the Specialist Hospital in Gusau, the state capital. He was the 10th child that died in the family after eating the poisonous meal.