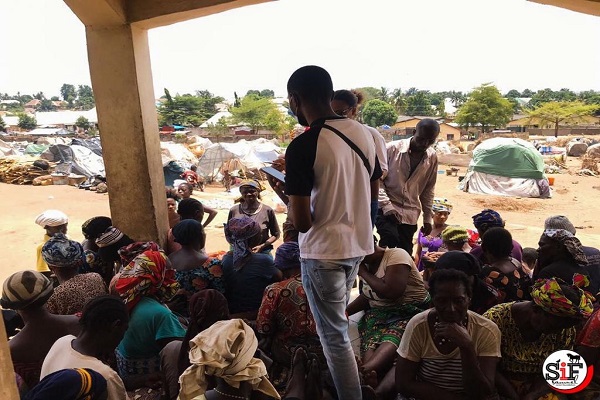 It began with stories read from articles, then rumours from people who visited the camp and worked in the development sector – then we began researching and asking questions which led to developing a research project titled Rural, Urban Rightful (RU) to investigate the lived experiences of Internally Displaced Persons (IDPs) and occurrences at the camp in Benue, Nigeria.

In December 2020, we visited several camps and interacted with residents at the camps to learn of their experiences and documented them. Our findings revealed women and children in vulnerable spaces are susceptible to certain abuses like extortion and sexual exploitation in the case of women.

Our foundation, Samuel Ioron Foundation conducted interviews with eleven girls who shared their experiences; for some, attempted rape, while others were disturbed by camp officers or persons in the host communities for sex in exchange for essential supplies, we learnt that refusal could leed to continued hunger as the women will be deprived supplies until they accept the proposals of the camp officers.

With the experiences shared, we curated materials to support sensitization of residents in IDPs, donating bodies, camp and humanitarian officers to educate them on the rights of IDPs and campaign against sexual exploitation in vulnerable spaces as these acts of injustices makes the IDPs victims twice over.

With these materials, we embarked on sensitization visits where we held focus group discussions with women and men; camp officers and IDPs who further shared their experiences on sexual exploitation.

Majority of camp residents are without any education and without a source of income as they depend on provisions donated by external organisations and individual persons and issues surrounding ineffective distribution processes are some of the drivers of sexual exploitation and extortion.

Cases of sexual exploitation are underreported as the residents either have no knowledge of their rights or see no need for reporting due to the perpetrators and punishment involved.

Organizations and donating bodies have a vital role to play towards curbing this menace.

Our foundation developed a curriculum with inputs from the residents at the camps to support sensitization, effective distribution processes, intervention assessment and have provided free access to all persons interested in hosting sensitization activities and campaigns against sexual exploitation in vulnerable spaces in Nigeria.

The Urban Rightful (RU) project is funded by MISEREOR.