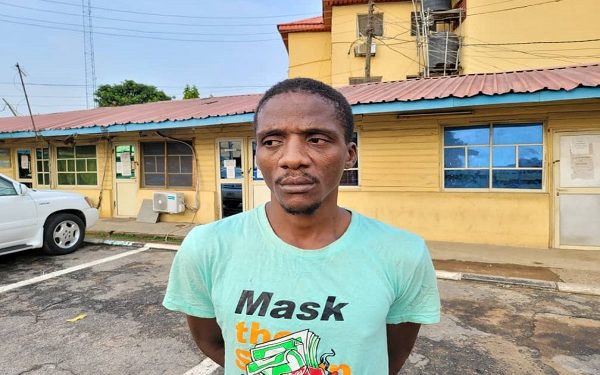 An inmate who escaped from the Owerri Correctional facility has been arrested in Lagos.

The suspect escaped during the jailbreak in April. He was arrested by the police over alleged theft of Subscriber Identification Module (SIM) card.

The suspect, Oyemachi Maduabuchi, 34, was alleged to have stolen the SIM and a memory card belonging to a member of a church his elder sister took him to for deliverance on April 20, a day after he arrived Lagos.

It was learnt that the suspect, who was in prison for 12 years awaiting trial on charges of conspiracy, armed robbery and arson, was at the verge of regaining his freedom through an out of court settlement process being pursued by his family before he escaped from the facility the night of jailbreak.

As soon as he left the prison facility, he was said to have gone to his hometown, Onitsha in Anambra State to see his mother, who then linked him up with his elder sister, Amarachi, a resident of Customs Bus Stop, Ijegun, Lagos.

Maduabuchi, according to a statement by police spokesman, Olumuyiwa Adejobi, came to Lagos on April 19 and was taken to a church in Ijesha for special deliverance the following day but ended up stealing the items.

“The sister thereafter invited him to Lagos on April 19. The suspect was kept in the sister’s house where she used to lead him to church for special deliverance service.

“In the process, after the night vigil on April 20, at Bride Assembly Church, Ijesha, the suspect allegedly stole the sim and memory cards of a member (name withheld) of the church before he was eventually arrested and the stolen items recovered from him.

“In the course of police investigation, it was revealed that the suspect has been standing trial since 2009 for conspiracy, armed robbery and arson before Justice Nna Amadi of Mgbidi High Court 1, at Mgbidi, Imo State.

“The suspect has confessed to the crime while the Commissioner of Police, Lagos State, CP Hakeem Odumosu, has directed that the suspect should be handed over to the Nigerian Correctional Service for further investigation and necessary action.

“The Commissioner of Police therefore assured the general public that the command will not relent on its efforts in making the state safe and peaceful for all and sundry to live in as all hands are on deck to effectively police Lagos State,” said Adejobi.