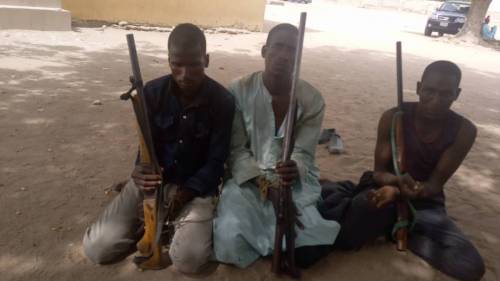 No less than three persons were on Saturday arrested for alleged armed robbery and kidnapping by the police in Adamawa State, according to SaharaReporters.

Three single barrelled guns were said to have been recovered from them, according to the spokesperson for the police command in the state, DSP Suleiman Nguroje.

He said, “The Adamawa State police command, on 20/03/2021 apprehended three suspects responsible for the kidnapping of Engineer Elan Jobbo, a principal of VTC Jabbi Lamba; Alhaji Jauro Mamburso and Alkani Zumbe, all of Girei and Song Local Government Area, sometime in May 2020.

“They were apprehended at their various hideouts in Muleng  and Chigari villages of Song and Fufore local government areas, following credible information and intense search by the police and vigilantes of Song Division,” he said.

Nguroje disclosed that the suspects have been notorious for armed robbery and kidnapping across the border between Nigeria and Cameroon.

He said the Commissioner of Police, CP Aliyu Adamu Alhaji, has directed further investigation into the case to bring up more human and material evidence for proper prosecution.

Meanwhile, as part of efforts to tackle criminal activities and other related offences the Commissioner of Police has deepen intelligence and also strengthened security in the state.

He has also deployed Rapid Respond Squad (RRS) and Anti-Kidnapping unit of the command to go after the kidnappers in their hideouts everywhere within the state, according to Nguroje.