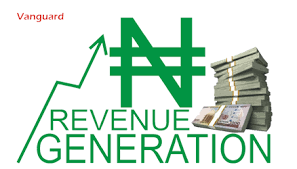 Between January and May 2021, the Federal Government recorded a revenue shortfall of N1.4tn, an analysis of the Medium Term expenditure framework and Fiscal Strategy paper for 2022-2024 has shown.

According to the report obtained from the Budget Office of the Federation, the Federal Government’s projected revenue for the 2021 fiscal year is N7.9tn, of which N3.2tn was earmarked as pro rata target for the period under review.

Companies Income Tax and Value Added Tax collections were ahead of the budget targets with N290.90bn and N123.85bn, representing 102 per cent and 125 per cent respectively of the prorata targets for the period. Customs collections was N204bn, 86 per cent of target.

Other revenues amounted to N762.7bn, out of which independent revenues accounted for N487.01bn.

Further analysis of the report revealed that within the same timeframe, the government recorded a budget deficit of N3tn.

The report showed that Federal Government released N4.8tn to cover expenditures made between January and May, representing 92.7 per cent of the prorated budget. “This excludes GOEs’ and project-tied debt expenditures.”

Out of this amount, N1.5tn was spent on personnel cost, including pensions; N973.13bn was spent on capital projects while N1.8tn, the total revenue generated within the stated period, was plunged into debt servicing

Over the past few years, the Federal Government has grappled with revenue shortfalls, which informed the introduction of the Strategic Revenue Growth Initiative by the finance ministry.

The SRGI which was instituted by the Federal Government in 2018 contains a robust set of initiatives that was cascaded down as programme portfolios to revenue generating entities.

The Minister of Finance, Budget and National Planning, Zainab Ahmed had earlier said that the initiative was expected to grow Nigeria’s revenue to Gross Domestic Product ratio from the current eight per cent to 15 per cent by 2023.

Ahmed had said, “The SRGI and Finance Act, 2020 will aid the economic recovery process of the Nigerian economy through initiatives and strategies that will grow fiscal revenues, improve the Ease of Doing Business, counteract the impact of the oil price fluctuations and integral fiscal monetary and trade policies.”

However, it appears that the initiative is yet to achieve its desired objective going by the revenue shortfall currently being experienced by the government.

Speaking on the development, finance experts said that the government needs to explore other sources to boost its revenue earning potential.