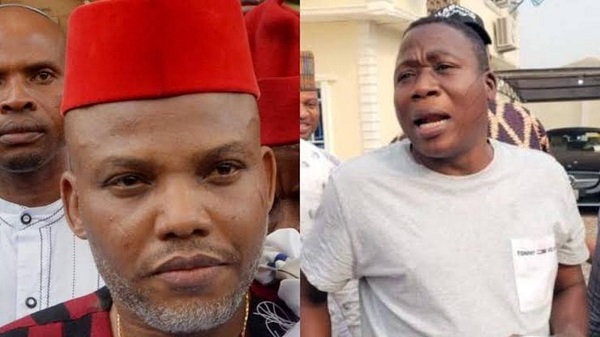 If anyone had doubted that President Muhammadu Buhari’s administration was on to a concerted crackdown on separatists, they had the express word of government last week confirming it. The presidency celebrated “enhanced collaboration of the Nigerian law enforcement agencies as they executed, with great synchronisation, arrests of individuals who had inflicted pain and hardships on fellow citizens.”

Fugitive leader of the outlawed Indigenous People of Biafra (IPOB), Nnamdi Kanu, was tackled down and dragged back in the dock at the Federal High Court in Abuja on Tuesday, 29th June, for his trial over a sleuth of charges including terrorism, treasonable felony and arms running. He had been ‘intercepted’ somewhere abroad penultimate Sunday and repatriated back to Nigeria through what Justice Minister Abubakar Malami termed “collaborative efforts of Nigerian intelligence and security services.” The minister did not disclose the country where and how the IPOB leader was apprehended, but many of the separatist’s allies have since fingered Kenya whereas Kenya has strongly refuted the claim.

Kanu was first arrested in October 2015 and arraigned in court by government, but he secured bail in April 2017 and fled Nigeria in September, same year, after an invasion of his home in Afara-Ukwu, near Umuahia, Abia State, by the military. Following his abscondment, Justice Binta Nyako revoked Kanu’s bail over his failure to show up in court for continuation of his trial, and he had since then been a fugitive from Nigerian law. From his base abroad, he kept up fiery rhetoric against the Nigerian state and government and masterminded the formation of the military wing of IPOB known as the Eastern Security Network, which was accused of attacks on public infrastructure, security agents and personages especially in the Southeast zone. Upon his re-arraignment penultimate week, the judge ordered Kanu remanded in the custody of the Department of State Security (DSS) and adjourned trial to 26th July.

Barely 48 hours after Kanu’s forced re-appearance in the Abuja court, security agents of government staged a deadly raid at dawn on the Ibadan, Oyo State, home of Yoruba rights activist Sunday Adeyemo, widely known as Sunday Igboho. The activist had been in the vanguard of advocacy against the menace of killer herdsmen particularly in Southwest communities, and he had vigorously crusaded for carving out a Yoruba nation from the Nigerian federation. He had held mobilisation rallies across Southwest cities, with his eyes set on Lagos as the next stop until his residence was lethally attacked by DSS operatives and he was forced underground few days to the Lagos rally. That rally nonetheless held without Igboho’s physical participation but the police rolled out to crush it, resulting in the death of a young stander-by in disputed circumstances and the arrest of many of the ralliers.

The DSS meanwhile confirmed staging the raid on Igboho’s home Thursday, 1st July at about 1:30a.m., saying it acted on intelligence reports showing he was stockpiling arms in his house. In the aftermath of that raid, the activist’s expansive abode resembled a war theatre – with blood smeared all over and sundry items of property, including exotic cars, vandalised. We got to know those blood stains were from casualties of the encounter from among Igboho’s household members, as reports claimed no fewer than seven of them were slain by the DSS operatives’ firepower while the secret police confirmed two. The disproportion of casualty suffered on respective side was flaunted by the agency’s statement. “On approach to the residence, the (security) team came under heavy gun attack by nine men suspected to be Igboho’s guards. Six of them were armed with AK-47 guns, and three others with pump-action rifles. In the course of the exchange, two of Igboho’s armed men were gunned down while the rest were subdued and arrested. Only one operative who was shot by the assailants on his right hand sustained injury. He has however received medical attention and is very stable,” DSS spokesman Peter Afunanya told a media conference in Abuja later in the day as he paraded 13 suspects arrested from Igboho’s household. He as well displayed an array of weapons and other items allegedly recovered from Igboho’s house, stating that the activist was marked for arrest and advising him to turn himself in.

But from hiding, Igboho denied that the weapons the DSS claimed to have recovered from his house belonged to him, saying the charge was only to frame him for persecution. He argued that the operatives who invaded his home “either planted the ammunitions being paraded in the media in my home or harvested them from their armoury to frame me. The arms paraded are not mine, they are ‘government magic’. I protect myself with traditional powers, not with guns.” He questioned why the agents who came raiding under the cover of darkness allegedly destroyed surveillance cameras he had installed at his home before they carried out their operation if not that they had ulterior motives. “In this modern age of technology, why didn’t the security operatives put on body cameras to record their activities from the point of entry to their time of exit?,” be added.

Questions have been raised in several quarters about the legality of both the re-arrest of Kanu and the nighttime raid on Igboho’s house, with the disposition of government being that the end justifies the means. “By this singular action of our security forces, sanity, calm and peace had been returned to our communities that previously lived in constant fear of (IPOB’s) misguided elements,” presidential spokesman Garba Shehu said in a statement about the re-arrest of Kanu. And concerning the raid on Igboho’s house, he described the Yoruba rights activist as “a militant ethnic secessionist, who has also been conducting acts of terror and disturbing the peace under the guise of protecting fellow ‘kinsmen’,” adding: “His seditious utterances and antics, which he is known to have publicly expressed, have over time morphed into very hateful and vile laden speeches.”

But it is far from being a consensus that the end of silencing separatist agitations justifies the means that have been adopted by government. Of course, anything that challenges the authority of a sitting government makes itself fair game for crackdown by that government. Sovereign power in a civilised context, however, is not demonstrated only by sheer superiority of force over challengers – more so when they are internal challengers and not affronting external aggressors – but also by addressing motivations for the challenge to sovereignty. Talking about Nnamdi Kanu, there is no question the activities of IPOB and its military wing constituted a menace – not just to the Southeast region but also the entire country, considering that some violent misadventures linked to those squads nearly ignited counter-violence across the country. But the passionate following he commands among his people is indicative of a fundamental dissatisfaction with the Nigerian nationhood that needs to be addressed. And so, whereas the Buhari administration’s sovereignty could be demonstrated by subjecting Kanu to harsh retribution of the law for the offences he is being accused of, it could be better exercised by seizing the opportunity of having him in a pincer-hold to debrief him about his grouse and seek to redress the issues involved.

The attack on the house of Igboho took government brigandage to a new height, and the sheer disproportion of the force applied overrode whatever legitimacy it might have had. DSS said its operatives were shot at by Igboho’s guards on their approach to the residence at about 1:30a.m.; but if they were guards, could they have folded their arms upon seeing an invading force at such unholy hour and without prior notice of visitation? Lawyers were at odds over the propriety of the timing: eminent rights advocate Femi Falana, SAN said no law provided for a security raid to be conducted at such hour, while reputable barrister Jiti Oguntoye has been shown citing statutory provisions to the effect that formal search warrants could be executed at any time of the day. But DSS never said it executed a duly obtained search warrant, its statement was that it acted on intelligence and it is curious it employed such heavy sleigh of hand against a civilian suspect it had not previously invited for questioning. Even the charge of weaponry and arms stockpiling is moot, because legal procedure for conducting a search wasn’t followed and Igboho has spoken up to allege those weapons were planted.

Separatist agitation isn’t in itself a crime, only that agitators must conduct themselves decently. But the root causes of such agitation must as well be confronted and redressed. And if we claim to be in a democracy, there are norms of conduct that must distinguish us from behaviour in a police state.

Please join me on kayodeidowu.blogspot.be for conversation.