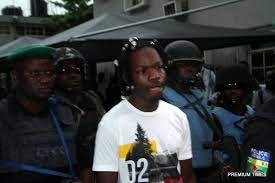 Justice Nicholas Oweibo of the Federal High Court sitting in Ikoyi, Lagos State, on Monday, adjourned the continuation of trial in the case of Afeez Fashola, popularly known as Naira Marley, till October 5, 2021.

The artiste was arraigned in 2019 on 11 counts of credit card fraud preferred against him by the Economic and Financial Crimes Commission, to which he pleaded not guilty.

CityNews Nigeria learnt in a statement by the anti-graft agency’s Head of Media and Publicity, Wilson Uwujaren, revealed that since the commencement of his trial, the prosecution had called two witnesses and forensic experts, Nuru Dalhatu and Augustine Anosike, who revealed to the court how the defendant allegedly frequently visited sites where stolen credit cards were sold to fraudsters, as well as other evidence recovered from the defendant’s mobile device.

The statement read in part, “At the resumed sitting today (Monday), the prosecution counsel, Bilkisu Buhari, informed the court that the matter was slated for cross-examination of the second prosecution witness, Anosike, and also urged the court to call on the witness for the continuation of the hearing.

“However, counsel for the defendant, Akinwale Kola-Taiwo, asked the court for a short date on the grounds that the matter was for mention and not continuation as disclosed by the prosecution.

“Justice Oweibo granted the prayer of the defence and adjourned the matter till October 5, 6 and 7 for continuation of trial.”

In another development, Justice Efe Ikponmwonba of the High Court sitting in Benin City, Edo State, has sentenced two Internet fraudsters to prison.

A statement by the EFCC’s spokesman, Uuwjaren, said the convicts, Ehigiator Kennedy and Idoko Onakpa, were arraigned on charges of impersonation, contrary to and punishable under Section 484 of the Criminal Code Cap. 48 Laws of Bendel State of Nigeria (as applicable in Edo State) 1976.

The charge against Onakpa read, “That you, Idoko Enape Onakpa (alias Mathew Lawrence), between 7th September 2012 and 9th October 2012, within the jurisdiction of this honourable court, did with intent to defraud one Harvath Alexanda and Anete Losberga (white ladies) of their hard-earned money, falsely represented yourself to be a citizen of the United States of America, but living in UK, by sending fraudulent/scammed emails and pictures on your Yahoo mail account [email protected] to them through the Internet, which pictures and identity you claimed to be yourself, thereby committing an offence.”

The defendants pleaded guilty to the charges.

The prosecution counsel, Isa Agwai, prayed the court to convict and sentence them accordingly.