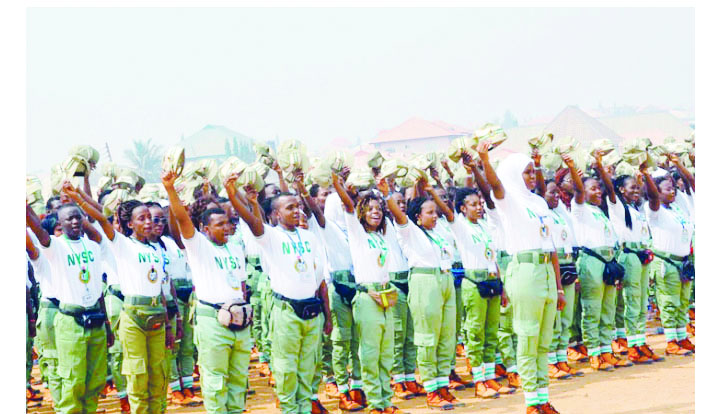 Within a span of less than two months, there have been different indications of the prospects and potentials of the National Youth Service Corps (NYSC), a para-military scheme by which Nigerian tertiary graduates below 30 years of age are mobilised for mandatory one-year service to motherland.

In the third week of May, a House of Representatives member, Awaji Abiante from Rivers State, sponsored a bill to dump the scheme, which reached second reading in that legislative chamber. Abiante proposed the bill to amend Section 315 (1)(a) of the 1999 Constitution, arguing that the NYSC need be scrapped because it has failed to address its founding objectives and given heightened insecurity nationwide that endangers its members, who by rule serve outside of geopolitical zones of their nativity. Reacting to that bill, the Federal Government said it had no intention to scrap the 48-year-old scheme but rather was pursuing its reform. Youth and Sports Development Minister Sunday Dare said the NYSC remained a great tool of national development for Nigerian youth, and the Muhammadu Buhari administration was determined to retain it though “dynamic reforms and initiatives towards current realities are ongoing.”

A bigger alarm about the scheme was lately triggered by a comment from NYSC Director-General Brigadier-Gen. Shuaibu Ibrahim that corps members are part of the national defence policy and could be mobilised for war if the need arises. “Corps members are on reserve. They are part of the national defence policy of this country. So, where there is serious war, our corps members are educated, they are knowledgeable and they can be trained,” the NYSC boss said on a Channels TV 3rd June, adding: “If not for the knowledge, where are you going to mobilise such young Nigerians to train them quickly to put in their best for the country?” He further argued that the scheme had become more important than ever in the face of mounting calls for secession in Nigeria.

With that comment generating intense public concern, the NYSC rushed back last Friday to deny that corps members were being mobilised for war. A statement by the scheme’s spokesperson said the comment by the NYSC Director-General had been misrepresented, and that he had only said in line with the national defence policy, corps members are like soldiers on reserve because their education, exposure and sophistication could make them easily adaptable to military training. “General Ibrahim never at any point said that corps members are being mobilised to fight war. The scheme shall continue to safeguard the interest of corps members at all times,” the statement added.

You would be tempted to ask whether that follow-up statement compared with the D-G’s comment was mere semantics or substance. Whichever it is, the NYSC presently is civic conscription, and it must under no circumstance be converted to military conscription without citizens’ conscious buy-in. The scheme should not be scrapped, but neither should corps members ever become war fodder. Hardball has spoken!