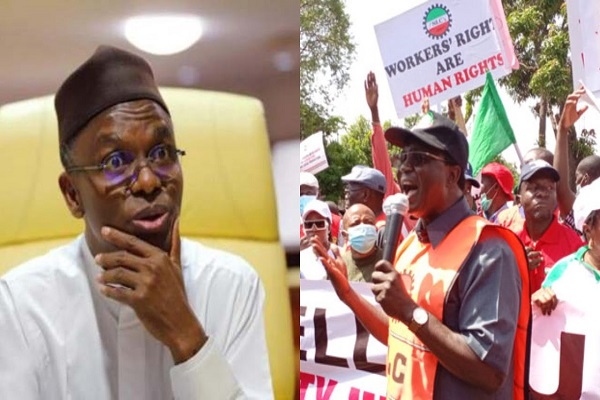 The Nigeria Civil Service Union (NCSU) has provided backing for the actions taken by the leadership of the Nigeria Labour Congress (NLC) to protest the sacking of workers by the Kaduna State government.

The union, in a communiqué issued at the end of its National Executive Council meeting in Abuja also condemned what it described as various anti-workers policies of Governor Nasir El-Rufai-led government.

The communique was signed by Comrade Lawrence Amaechi and Yahaya Ndako, President and General Secretary respectively.

The union justified the May 16 to 19 strike, saying it (strike) was necessary to mount pressure that will make the Kaduna State government see reason workers in the state should be treated better.

According to the communique, the NEC of the union expressed “serious concern over the high level of security challenges in the country.”

The communique reads in part: “The meeting observed that it was unspeakable that the high rate of banditry, kidnapping, ritual killings and disturbing armed herdsmen across the country: the meeting hereby called on the Federal Government to re-strategize and scale up new frontiers that will clip the dreadful tide of insecurity in the country through egalitarian policies that will divert the mindset and the attention of youth in Nigeria through proper gainful employment.

“The NEC-in-Session supported a proper restructuring of the country that will lead to true federalism in all the facets of political architecture of Nigeria and in line with the dictate, lettered and spirit of the constitution of the Federal Republic of Nigeria.