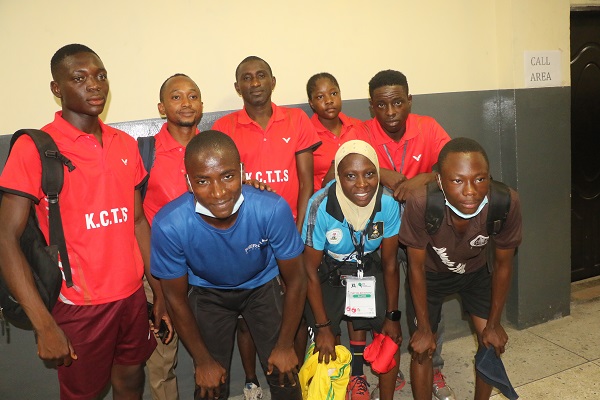 Despite spending seven seasons so far in the Nigeria Professional Football League (NPFL), Lobi Stars vice-captain Samuel Mathias has highlighted winning the league title with Kano Pillars in the 2013/2014 season as his fondest , reports Taofeek Babalola.

Mathias had nothing in mind to do as a career other than to play football right from childhood  because of the passion he has for the beautiful game.

As soon as he finished his secondary school education he went into football fully.

He made his league debut in 2013 in the game against Kaduna United while playing for Gombe United, it has been a success story for the 23-year-old midfielder.

“When I was young, I started playing with oranges on the street in Kaduna and after sometimes, I was making nylon as football,” Mathias recalled his humble beginning. “I have passion for football that’s why I chose it as a career.

“I come from a large  humble family;  we are eight in numbers; four girls and four boys.

“ But today I thank God for football because it has helped me in so many ways and I don’t have any regret choosing football as a career,” he further told NationSport.

After scoring on  his league debut against shooting Stars Sports Club (3SC) in 2013, the playmaker has gone on to score 29 goals with about 48 assists with five clubs.

He continued: “This is my seventh season in the local league with a lot of wonderful experience.

“My debut league goal was against 3SC in Gombe and goalkeeper Dele Ajiboye was in goal for the 3SC. I was so excited because my only goal in that game gave Gombe United victory in the encounter.

“Gombe United are good club with very good people and good management. I love them.

“Kano Pillars was my second club where I won the NPFL title; they are loving people and  passionate about football.

“I had good seasons at El-Kanemi and Akwa United too as well as my present club Lobi Stars.”

Mathias played a vital role when  Kano Pillars won the league title in the  2013/2014 season as the former Kano State Governor, Engineer Rabiu Musa Kwankwaso rewarded the players with a brand new Toyota Corolla cars, which would be Mathias first ever car.

According to him, it was a thing of joy that would be cherished for the rest of his life. He attributed the team’s success story to the unity among the players and their determination for glory.

“That was my biggest moment in my football career. It was also the first time I met a governor one-on-one. We were given car gifts after winning the league title. That moment was fantastic.

“ The governor gave the 25 players brand new Toyota Corolla and it was my first car while 10 players were given seven hundred thousand naira each. It was the day I will never forget in my life,” he stated.

Meanwhile, after 23 league matches, Lobi Stars are occupying 8th position on the log with 23 points. The former youth international is confident that the team will end the season on a positive note.

“We were not doing too well since the start of the season up till this very moment but one thing is sure that we would end the season on a good note,” he said.

The Benue State-born player had played for the national team at different levels; U-20, U-23 team and CHAN Eagles.

Nigeria failed to qualify for the 2020 WAFU and CHAN tournaments.  Mathias, who was part of the squad, said the team was unlucky.

“We did all we could to qualify for those tournaments but only God knows why we didn’t qualify,” he said.

Like any other aspiring player, Mathias’ future ambition is to play outside the country by the end of this year. He loves Barcelona as a club but he admires Real Madrid midfielder Luka Modric as a player.

“I have done well at the local scene and I know it is time for me to take my football to the next level. My target and prayer is to play outside the country before the end of this year by the grace of God. I would like to play for Barcelona,” he stressed.

Mathias, who can play as a left and attacking midfielder, played for the Flying Eagles at the eight nation tournament in Toulouse, France in 2013. He was part of the squad paraded by coach Salisu Yusuf for 2017 CHAN qualifiers but he missed the final tournament in 2018 in morocco. He was also in the squad for the 2018 WAFU competition in Ghana where Nigeria lost 4-1 to Ghana in the final.