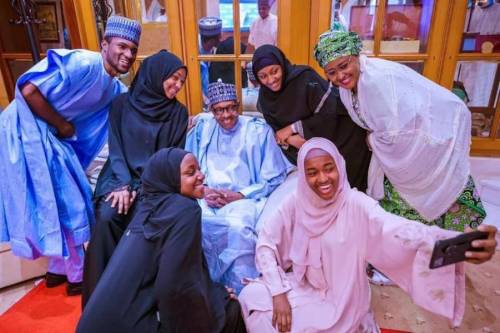 President Buhari and his family

An exclusive report by SaharaReporters reveals that ahead of President Muhammadu Buhari’s medical trip to London, United Kingdom, his wife, his children have left Nigeria for the European country.

SaharaReporters gathered that Aisha Buhari, wife of the President, is also expected to join them today (Sunday).

“All President Muhammadu Buhari’s children have moved to London in advance of his medical trip. He will travel anytime from now. His wife, Aisha will join the children today,” a source told SaharaReporters.

The Presidency had earlier announced the postponement of Buhari’s medical trip to London, earlier scheduled for Friday.
Special Adviser on Media and Publicity, Femi Adesina, did not give reasons for the postponement in a statement he issued.

The statement only said a new date will be announced in due course.

Buhari and members of his family routinely travel to the UK for medical treatment amidst the abysmal state of health care and poorly equipped hospitals in Nigeria.

In March, the Nigerian leader went to the UK for what the Presidency described as a “routine” check-up.

The trip sparked off a controversy as it coincided with the strike by the National Association of Resident Doctors (NARD).

Since he assumed office on May 29, 2015, Buhari has embarked on medical trips abroad at least five times, covering a period of no fewer than 170 days of the five years he had been in power.

The following is a timeline of the President’s trips for medical treatment; on February 5 to 10, 2016, the President took a six-day vacation in the United Kingdom, saying that his doctors lived in England.

Between June 6 and 19, 2016, Buhari went on a 10-day medical trip to England for an ear infection surgery. He extended his trip by three days to rest.

On January 19, 2017, the President was back in London again on a medical vacation.

On February 5, 2017, he wrote to the National Assembly, seeking an extension of his London medical leave. Later on March 10, 2017, Buhari returned to Nigeria but didn’t resume work immediately at Aso Villa.

The Presidency had claimed that “he was working from home.”

On May 7, 2017, Buhari embarked on a trip to London for another medical vacation. He returned after 104 days – the longest he had stayed outside the country.

On August 19, 2017, Buhari returned to Nigeria, and it took him a while to resume work because rats had purportedly damaged furniture in his office.
The Presidency, therefore, announced that he would be working from home.

Also, from March 30 to April 6, 2021, the President embarked on another trip for a routine medical check-up in London.