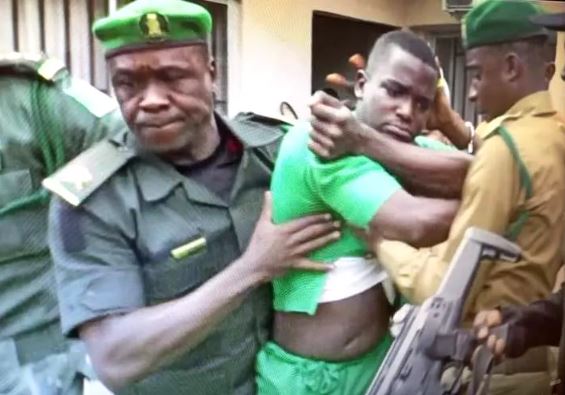 Mr. Olatoye Durosinmi, the Commissioner of Police in Akwa Ibom State, has reacted to the attempt by Uduak-Abasi Akpan to escape.

The CP commended the officers of the command for preventing attempt by Uduak-Abasi Akpan, who was convicted thursday for Iniubong Umoren’s murder, to escape after the judgement.

The Police Public Relations Officer, Mr. Odiko MacDon, who disclosed this in a statement  titled: “Iniubong Umoren-Justice at last”, and made available to newsmen, Friday in Uyo, said Durosinmi also received news of conviction of the serial rapist and murderer with great delight.

His words: “The Commissioner of Police, Akwa Ibom State Command, CP Olatoye Durosinmi has received with great delight the news of the conviction of Mr. Uduak Frank Akpan, the notorious rapist and murderer.

“The suspect who was arrested by the Police Command on 30th April, 2021 in connection with the rape and murder of Miss Iniubong Umoren has today, August the 4th, 2022 been convicted and sentenced to death by hanging by the High Court, vindicating the stance of the Police.

“The CP applauds the Nigeria Police, Akwa Ibom State Command for the swift arrest and a thorough investigation and for again promptly overpowering him (Uduak-Abasi) today as he attempted to escape after the judgement was given, the Judiciary for their dexterity and the good people of Akwa Ibom State for their patience and resilience.

The convict Uduak-Abasi had after the pronouncement of judgement on him, rushed out of the dock where he was seated alongside his father and sister, attacked and tried to strangulate a lawyer inside the courtroom, and then attempted toescape through a nearby door.

The scenario had caused an uproar and panic in the courtroom, but security men comprising the police and prison officials moved Swiftly and overpowered him,  quickly dragged into the Prisons vehicle and whisked him away from the premises.

The trial judge, justice Bassey Nkanang had sentenced Uduak-Abasi, the first defendant in Iniubong Umoren’s murder case to be hung until he dies after finding him guilty of murder, and also  life imprisonment for offense of rape preferred against him.

However, Justice Nkanang had discharged and acquitted his father and sister, Frank Akpan and Anwan-Bassey Akpan, second and third defendants respectively on ground that the prosecuting counsel, did not provide sufficient evidence showing that they had assisted the first defendant to escape justice.

Recall that the trio were prosecuted by Akwa Ibom State government on four-count charge bordering on rape, murder and accessory to murder after the fact.

The  late miss Iniubong Umoren, a graduate of the University of Uyo (UNIUYO) popularly addressed by the media as ‘Jobseeker’, was lured with a job offer, raped, murdered and buried in a shallow grave by the convict in April 2021, while she was awaiting the compulsory National Youth Service Corps (NYSC) scheme.