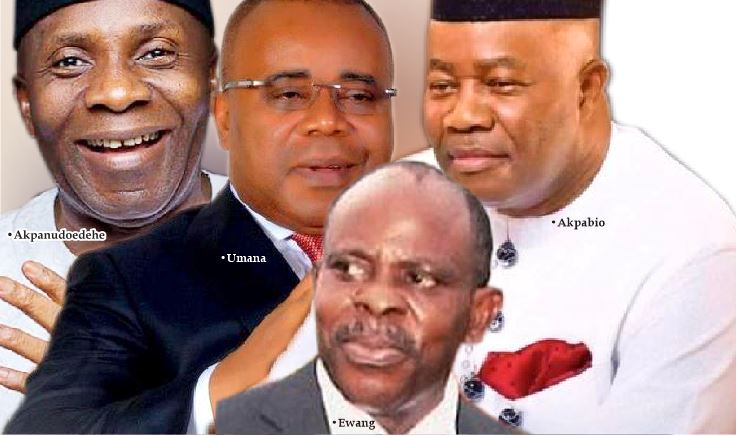 The internal crisis rocking the All Progressives Congress (APC) in Akwa Ibom State is not abating, rather, party sources claim it is festering. Assistant Editor, ‘Dare Odufowokan, examines the reasons for the division within the party.

As the dates for the 2023 general elections draw nearer, the All Progressives Congress (APC) in Akwa Ibom appears to be losing the battle to put its house in order. As we speak, the party is sharply divided into two factions with chieftains and members of the party pitching their tents behind either of the two main gladiators in what has now become a fierce battle for the control of the party in the South-south state currently governed by the Peoples Democratic Party (PDP).

While one of the warring camps is under the firm control of former governor and Minister of Niger Delta Affairs, Senator Godswill Akpabio, the other group is backing the current secretary of the party’s caretaker committee at the national level, John Akpanudoedehe, also a former senator. On both sides of the divide are prominent chieftains of the embattled party, struggling to outdo one another in the struggle to garner support for their chosen leader.

Checks by The Nation revealed that Senator Akpanudoedehe nurses a gubernatorial ambition for 2023 on the platform of the APC. “He is yet to officially declare his intention, largely because of his current assignment at the national secretariat of the party. But it is common knowledge within the party and across the state that Udoedehe is planning to run for governor of Akwa Ibom in 2023,” a source told our correspondent during the week.

Meanwhile sources within the party said Akpabio, a former governor of the state, acclaimed to have widespread political contacts within and outside the APC, is not hiding his reservation for the party secretary’s gubernatorial quest. This, we learnt, has pitched supporters of the two politicians in different camps within the party. “Akpabio will not support Akpanudoedehe’s governorship ambition for reasons known to him and he is not hiding it. Akpanudoedehe wants the APC ticket by all means.  That is why we have two camps in Akwa Ibom APC,’ a party source said.

It was also gathered that the heightening tension within the party may not be unconnected with the politics of the next presidential election, especially the struggle for the 2023 APC presidential ticket. According to checks by The Nation, there are indications that the two gladiators may have pitched tents with different aspirants in the struggle for the ruling party’s presidential ticket. Consequently, the race to win the state for their preferred aspirants is already playing out.

“Both Udoedehe and Akpabio are unrepentant in the conviction that the next president must come from the southern part of the country. But it appears that is the only similarity they share on the matter. While one is an avowed supporter of a presidential hopeful from the southwest, the other has been fraternizing with another APC chieftain from the South-south who is also being rumoured to nurse presidential ambition,” our source explained.

Former military governor of Ogun and Rivers states, Group Captain Sam Ewang (retd), who is also a chieftain of the APC in Akwa-Ibom State, while explaining the state of the party, alleged that 2023 politics, as well as external influences are responsible for the crisis rocking the opposition party in the state. According to him, some prominent chieftains of the party in the state are playing the scripts being dictated by some interested persons from outside the state.

“I want to repeat that some of the gladiators here are servants of someone outside the state who wants to be in charge of the South-south and also Nigeria. These people have become servants to him. They have been bought and pocketed. That is why they want to ensure that the entire APC in Akwa Ibom is subject to him. And they think Godswill Akpabio is a problem because Akpabio will always say no to what their master wants. That is the whole problem of the APC here,” he said.

“Let me make it very clear that every right-thinking person in the party across the state wouldn’t allow Akpabio to superintend over them. Majority chieftains and members of the party have made it clear that they do not want him as leader of the party in the state. Yes he is a minister and the most senior political office holder in the state, but the owners of the party have on many occasions insisted he cannot lead the party. That is the decision he is refusing to abide with and that is why he and his cohorts are troubling the party,” he claimed.

But as the crisis festers, more individuals and groups within the party are voicing their concerns. One of such is the Centre for APC Volunteers (APCV) based in Uyo, the state capital. The group called on the warring factions to subsume their personal interests in preference for the overall good of the party. According to the APCV, the lingering crisis in the Akwa Ibom chapter is the handiwork of organised centrifugal forces who are only interested in capturing power in 2023.

This was contained in a statement issued by the Secretary-General of the group, Nse Kierian Okon, titled: Akwa Ibom APC Crisis: Let the masquerades come clean. The group expressed fear at the turn of events in the APC and predicted that the crisis in Akwa Ibom state, if not curtailed, may debar the party from performing well at subsequent elections in the state. The group also warned of possible violence arising from the crisis.

While urging the warring factions to sheath their swords and come to dialogue in the interest of the party, the group expressed sadness that the hope of the people of the state that the ruling PDP will be ousted in 2023 may be dashed. It then called on President Muhammadu Buhari and the national leadership of the party to “put partisan interest and the race for 2023 aside, and promptly intervene in the festering crisis.” This, the group said, is the only way to save APC in Akwa Ibom State.

The crisis further degenerated recently when some chieftains and members of the Akwa Ibom State chapter of the APC publicly rejected Akpabio as the leader of the party while describing as null and void the earlier proclamation of the Minister of Niger Delta Affairs as leader of the party. The group, made up largely of Udoedehe’s loyalists, argued that by law, the state chairman is the head of the party caucus in the state.

Akpabio had earlier been declared the leader of the party in the state at a stakeholders’ forum. Chaired by Ewang, the forum had many prominent party chieftains in attendance. Participant at the forum had said the choice of the Minister as leader, is natural. Many speakers at the meeting recalled that by the practice within the ruling party, Akpabio, as the most senior political office holder, should lead the party, in the absence of an APC governor. Few days later, the decision was reverted at another stakeholders meeting in Uyo.

In the communique issued after the meeting and obtained by our correspondent, stakeholders “endorsed the decision of the State Executive Committee (SEC) to declare as a nullity the unilateral proclamation and announcement of Sen. Godswill Akpabio as the State Party Leader of APC in gross violation of the party’s constitution in the unauthorised and illegal stakeholders meeting of Sunday, March 28, 2021. That the party hereby reminds every member and the general public that the State Chairman (or Caretaker Chairman as applicable here) is the Chairman of the State Caucus as provided for in Article 12.9 Sub (i) of the party Constitution (October 2014 As Amended) and remains the Party Leader in the State until further notice”.

National Caretaker Secretary of the APC, John Akpanuodehe, Managing Director of the Oil and Gas Free Trade Zone Authority, Obong Umana Okon Umana, Senior Special Assistant to the President on Niger Delta Affairs, Ita Enang, Sole Administrator of the Niger Delta Development Commission (NDDC, Efiong Akwa and Ewang, among others, attended the meeting. Akpabio, who was absent at the meeting, sent a letter of apology but failed to give details of why he failed to attend.

But Ewang was to later discredit the resolutions of the meeting and insist that Akpabio remains the leader of the party in the state as earlier announced. “They called for a stakeholders meeting and I went. When I went they allowed many people to speak and when I wanted to speak they didn’t allow me. And in annoyance, I decided to leave the venue of the meeting. Despite all that they said to condemn what I did and all that, and they didn’t allow me to respond, to tell them why I did what I did, I just stormed out of the meeting.

“And it was an open invitation for stakeholders and I got an invitation too. Some of them were making accusations, saying all manner of things. They even attacked the sole Administrator because he told them the truth that there was no appropriate APC registration of candidates and revalidation in the state. And when I stood up and said I must speak, they refused so I stormed out,” Ewang, who called on the national leadership of the party to intervene in the crisis, said.

The party’s candidate for Uyo Senatorial District in the last general elections, Elder Bassey Etim, described the move to reject Akpabio as condemnable. He said: I know they are trying to dent the image of Godswill Akpabio. The Caretaker Committee Chairman kept repeating that the meeting where Akpabio was endorsed the leader of the party in the state was illegal. How can a meeting convened by a personality like Group Captain Sam Ewang ( Rtd), a member of the Board of Trustees of the party be illegal? So I personally condemn what transpired.”

But the state caretaker committee dismissed all the allegations, insisting that Ewang and others erred in their declaration of Akpabio as leader of the party. The party also said there is no iota of truth in the claim that there were factions in the party and urged its leaders holding appointive positions to work for the interest and unity of the APC.